Aquino’s back channel to China is Trillanes 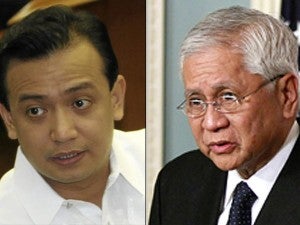 A tempest is brewing in the country’s diplomatic front with Foreign Secretary Albert del Rosario saying his efforts to resolve the lingering standoff with China over disputed territories in the West Philippine Sea were being torpedoed by a backroom negotiator.

“I think that while backchanneling has its purpose, in our case it’s doing more harm than good. It is important that we speak with one voice on this matter,” Del Rosario said in a recent  interview.

Del Rosario did not name the supposed spoiler, but Trillanes told the Inquirer that he felt alluded to.

The presence of Trillanes, leader of the Magdalo group behind the 2003 Oakwood mutiny,  in Cabinet meetings on China since May has raised not a few eyebrows, including that  of Senate President Juan Ponce Enrile’s.

In a phone interview, Trillanes said, “If Secretary Del Rosario was only close to being effective as a foreign secretary, then there wouldn’t be any need for a back channel in the first place.”

Trillanes has made no secret about his opinion that Del Rosario is unfit to represent the Philippines on the negotiating table with China because of his allegedly rabid opposition to any peaceful settlement with Beijing and his purported desire to bring the United States into the confrontation.

The senator said this was shown by a series of actions Del Rosario had allegedly made that appeared to intensify, rather than ease, the conflict between the two countries.

“He nearly brought us to an armed conflict with a superpower neighbor back in April and now that the back channel talks have enabled us to normalize our relations with China again without even ceding anything, he is still complaining?”  Trillanes said.

He referred to the confrontation between a Philippine warship and  two Chinese surveillance ships over Panatag Shoal off the coast of Zambales.

In a July 20 interview with dzIQ, Trillanes described Del Rosario as a “war freak.”

“[The] fear that China will build an outpost there in Scarborough was never true all along. It’s better that we just course this through peaceful means,” the former Navy lieutenant said in the radio interview.

“Many of us know for a fact that the good senator is staying very close to the West Philippine Sea issue. He fully knows what is factual and what can be established as a matter of record. The factual record would reflect otherwise.  The DFA (Department of Foreign Affairs) has remained faithful to the President’s mandate to defend what is ours and  to pursue a peaceful resolution on the West Philippine Sea issue, in accordance with the international law.”

“I’d rather that Secretary  Del Rosario be just happy with the fact that somebody else did the job he was supposed to do, which is to foster better relations with other nations as a means to promote our country’s interests,” Trillanes said.

Del Rosario was adamant in denying Trillanes’ charges that he had made treasonous acts.

“That  is totally untrue. He should be confronted on the basis of what he said. I don’t want to dispute what the senator is saying but I think what you have said to me thus far is untrue,” Del Rosario said.

The foreign secretary also rejected insinuations that he was against any peaceful settlement with China because he was protecting the interest of his former boss, Philippine Long Distance Telephone Co. chairman Manny V. Pangilinan.

Pangilinan controls Forum Energy, the consortium which owns the exploratory rights to  the Recto Bank off Palawan touted to be the country’s largest gas find and part of the territory being claimed by China.

Del Rosario has been accused of using the West Philippine Sea conflict as a leverage to cut a favorable deal with state-run China National Offshore Oil Corp (CNOOC) whose top officials were met by Pangilinan in China in May.

“I’m merely implementing the foreign policy in terms of defending what is ours. If I’m being accused of taking a tough stance and at the same time promoting the interest of Forum, it doesn’t equate since I would be taking a soft stance if that were the case,” Del Rosario said.

Trillanes said Del Rosario failed miserably in his attempt to convince US Secretary of State Hillary Clinton in May to intervene when Washington announced it would stay neutral in the conflict.

The senator blamed Del Rosario for his failure to get a joint statement from the Association of Southeast Asian Nations (Asean) to address the West Philippine Sea conflict due to his insistence in using Scarborough Shoal which Cambodia, a Chinese ally, naturally opposed.

Trillanes claimed that backchanneling efforts were close to working out an informal meeting between the President and Hu until Del Rosario got wind of these talks and insisted on taking over to ensure his presence during the meeting.

The President had declared he wanted a “heart-to-heart meeting” with Hu which Trillanes agreed would have cleared the air since their last meeting in August 2011.