AFP: No threats yet from Islamic extremists in wake of US movie 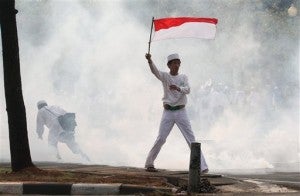 A Muslim man waves a red and white Indonesian flag as he and his fellow protesters are engulfed in white smoke of tear gas fired by riot police officers during a protest against American-made film “Innocence of Muslims” that ridicules Islam and depicts the Prophet Muhammad as a fraud, a womanizer and a madman, outside the US Embassy in Jakarta, Indonesia. Indonesians angered over the anti-Islam film clashed with police outside the embassy on Monday, hurling rocks and Molotov cocktails and burning tires outside the mission. AP PHOTO

MANILA, Philippines — The Armed Forces of the Philippines (AFP) played down, on Tuesday, rumors that alleged foreign Islamic extremists might have slipped into the country to spark violence during local protest actions against the US-made film, “Innocence of Muslims,” which triggered unrest in several Muslim countries.

Colonel Arnulfo Burgos Jr., AFP spokesperson, said Brig. Gen. Ronnie Ordoyo, chief of the Intelligence Service of the AFP (Isafp), told him that military intelligence agents did not receive any information in connection with the purported arrival of Muslim extremists from other countries.

“According to (Ordoyo), so far we have not monitored any threats coming from Islamic extremists,” Burgos told reporters at Camp Aguinaldo.

“However, we have further intensified our intelligence monitoring and collection efforts particularly in the southern Philippines as well as in populated areas,” he said, adding that the Abu Sayyaf bandits might “take advantage” of the situation to launch attacks.

“The possibility of the Abu Sayyaf carrying out attacks is always there. But they are contained in several areas and we have our unified commands handling that, particularly in Basilan and Jolo.”

Burgos said military units deployed in urban centers and other populated areas were closely coordinating with the Philippine National Police in securing these areas and in gathering intelligence information.

“Even if there is a pronouncement from the Moro Islamic Liberation Front (that they will not join violent protests), we will not let our guard down and we will continue to intensify our intelligence efforts,” he stressed.

He also said it was unlikely that the anti-US rally held by Filipino Mulims in Marawi City on Monday would spread to other areas.

Saying it was just a form of “expression,” the military spokesperson noted that the current situation in the Philippines was different to that of other countries. He also assured that state security forces were ready to respond to any eventuality.

“The most important thing here is for us to keep an open mind and understand one another,” Burgos said.