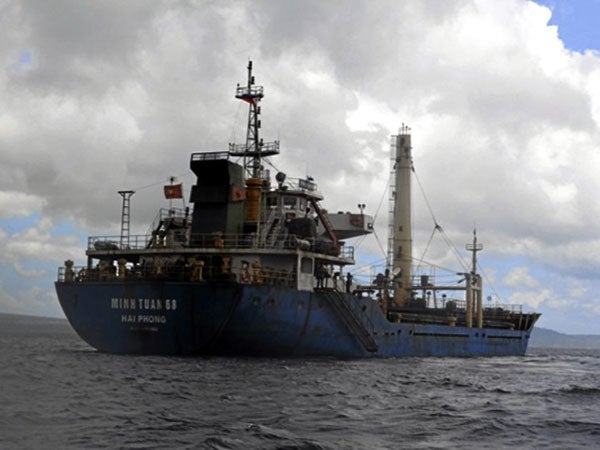 MANILA, Philippines—The Bureau of Customs has issued a warrant of seizure and detention (WSD) for a shipment of P112 million worth of Vietnamese rice on board the cargo ship Minh Tuan 68 at the Legazpi City anchorage area.

The WSD was issued after the National Food Authority failed to submit the required rice importation documents early this week.

The 94,000 bags of rice came on board the Vietnamese vessel which arrived on September 2.

The ship, which was not allowed to dock, is now anchored about a kilometer away from the Legazpi port, according to Commodore Joel Garcia, head of the Coast Guard-Bicol district.

The BOC “has requested the Coast Guard station in Albay for assistance in detaining the Vietnamese vessel for alleged illegal transport of a rice shipment from Vietnam,” Garcia said on Thursday.

The PCG has been guarding the ship to prevent it from unloading its rice cargo.

In an e-mail to the Inquirer, Garcia disclosed that “upon inspection by the Coast Guard boarding team of the vessel’s documents, it was found out that its cargo was intended to be discharged in the Legazpi port.”

“However, all the recipients of the rice shipment in account of the NFA are from northern and central Luzon.”

Early this week, the BOC office in Legazpi said the NFA and the rice shipment’s five consignees had promised to bring in the importation papers on Monday, but none were delivered.

The documents include the import permit issued by the NFA, the memorandum of undertaking between the NFA and the private consignees, and the authenticated notice of award and notice to proceed, the bill of lading and the payment of BOC duties and other fees.

Yolanda Navarro, head of the NFA office in Albay, said by phone on Monday that the importation was covered with proper documents, with the rice consigned to five multipurpose cooperatives, all based in Luzon.

She said, however, that some of the consignees have yet to complete their papers that were needed to be presented to the BOC.

The NFA official pointed out there was nothing wrong with using Legazpi as the port of entry for the rice shipment as Albay has been a regular port of discharge of imported rice consigned to the NFA.