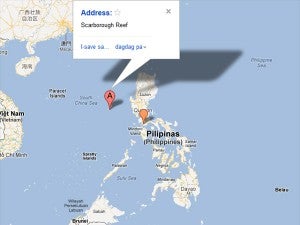 The official, who requested anonymity because he was not authorized to speak on the matter, said the latest reconnaissance report showed that there were two Chinese maritime vessels and one fisheries ship at the shoal.

The rope that the Chinese strung across the mouth of the shoal’s lagoon after a face-off between Chinese and Philippine vessels ended in mid-June to prevent Filipino fishermen from going there has not been removed, the official said.

The latest reconnaissance flight to Panatag Shoal was made “one to two weeks ago,” he said.

“[The Chinese vessels] are still there, but there are no more [Chinese] fishermen,” the official said.

The Chinese fishermen must have moved to other fishing grounds because the weather around Panatag Shoal remained stormy, he said.

But the Chinese vessels are also discouraging Filipino fishermen from going into the shoal, the official said.

“We have a report that they were told to leave. But even before, that’s what [the Chinese] were doing,” the official said.

The official said the government would file a diplomatic protest if the Chinese detained Filipino fishermen.