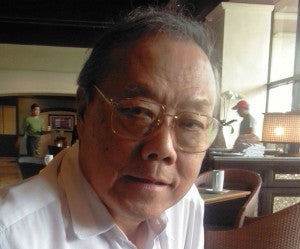 The Philippine government would have generated revenue enough to build a new sky train system had it followed the lead of Thailand in imposing higher taxes on alcohol and tobacco products, a visiting Thai tobacco expert said on Friday.

But it’s not yet too late, according to Dr. Prakit Vathesatogkit, an advocate of tobacco control and a former senator of Thailand.

Prakit, a specialist on pulmonary disease, was in the country for a three-day visit to share with senators and health officials Thailand’s two-decade-old sin tax law and help the Philippine government push its own legislation.

“The money we got from the sin taxes for one year alone was enough to build a new sky train system or a subway,” he said in an interview before he left the country on the weekend.

In 2011, Thailand generated 57-billion Thai baht (or $1.8 million) from excise taxes on tobacco and alcohol products based on a single-tier or unitary tax structure.

Thailand’s total revenue rose fourfold from 1993, a year before the sin tax law took effect, up to 2011.

“Even though the price of tobacco increased five times from 12 baht per pack to 64 baht in the last 20 years, the revenue of the cigarette firms were more or less stable,” he said.

The Philippine Senate’s ways and means committee has been tackling pending sin tax bills, which seek to increase taxes on alcohol and tobacco products to generate more revenue for government health care services.

On the Senate’s table are proposals to restructure the excise taxes on alcohol and tobacco products filed by Senators Miriam Defensor-Santiago and Panfilo Lacson, and House Bill No. 5727, the counterpart measure already approved by the House of Representatives.

During the previous hearing, Senate President Juan Ponce Enrile and Senator Ralph Recto warned that increasing sin taxes could lead to the prevalence of smuggling and revenue going down.

But in Thailand’s experience, Prakit said, the revenue of cigarette companies didn’t fluctuate sharply as the number of smokers just slightly went down from 12.2 million in 1994 to 11.5 million at present.

“What the tax policy did was bring down the smoking prevalence in reference to our population,” he said.

The Thai doctor said the tax policy did not just help smokers quit but also ensured that children would not be able to afford the bad habit.

In Thailand, a health organization called ThaiHealth, of which Prakit was a founder, offers services through the government’s two-percent surcharge tax on alcohol and tobacco products.

The Thai tax revenue provides a budget of $110 million to fund health promotion programs, education campaigns on alcohol and tobacco control, and promotion of healthy diets and the environment.

At present, only five of 10 Asean countries—Thailand, Singapore, Malaysia, Laos and Vietnam—have such mechanisms to regulate tobacco use and improve public health.

Prakit is now the executive secretary of the Action on Smoking and Health Foundation and an advisor of ThaiHealth and Thailand’s Department of Disease Control under the Ministry of Public Health.