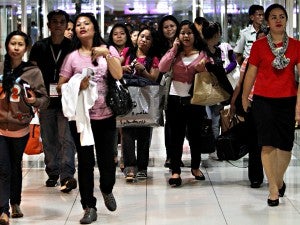 The Inter-Agency Council Against Trafficking (Iacat) said about 80 percent of the 1,800 overseas Filipino workers (OFWs) brought home from the Middle East country as the civil war there heightened were victims of human trafficking.

Most of them were from the provinces of Maguindanao, Basilan and Sulu in the Autonomous Region in Muslim Mindanao (ARMM), Ruby Ramores, Iacat executive officer, said.

Ramores told reporters at the sidelines of the antihuman trafficking convention here Friday that the trafficked victims were uncovered following a review of their documents during their repatriation.

“Their travel documents did not bear departure details, travel stamps were counterfeited, they traveled on assumed identities and their passports were fake,” she said.

Ramores said they were illegally recruited either by their friends or recruitment agencies three or five years ago.

Worst, many of them were between 13 and 18 years of age when illegally deployed to Syria.

She said some of the illegally recruited workers left the country via Malaysia or Singapore, as first countries of entry, before traveling to the United Arab Emirates’ cities of Abu Dhabi and Dubai. From UAE, they went to Syria.

In leaving the Philippines, Ramores said the illegal recruits were aided by corrupt immigration officials positioned at regular airports and ports, who take a share of the $37 million per year illegal recruitment activities by organized trafficking groups.

Ramores said Iacat has projected to uncover more cases as the repatriation of workers from Syria continues.

She said based on an assessment by the Department of Foreign Affairs, at least 98 percent of the 10,000 overseas workers in Syria were undocumented.

Prosecutor Darlene Pajarito of the Department of Justice in Western Mindanao said they have validated that the ARMM has become the primary target of human traffickers.

Superintendent Rodelio Jocson, Tawi-Tawi police chief, said efforts were being done to prevent human traffickers from smuggling recruits out of the ARMM province of Tawi-Tawi. He reported that several apprehensions and rescue operations had been conducted in recent months.

ARMM Assemblywoman Kim Datumanong said the legislative assembly is eyeing the past legislations that could strengthen border patrols; for the conduct of massive campaign against human trafficking and its negative effects; and hold advocacy activities like workshops.

She said there was also a need to improve the birth registration system in ARMM to prevent unscrupulous people from faking birth documents. Ayan Mellejor and Judy Quiros, Inquirer Mindanao