Oldest Filipino war vet was disciplined to the end at 111 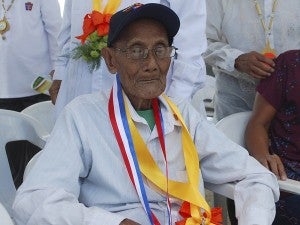 BONGABON, Nueva Ecija—Until his death a month ago at the age of 111, Alfonso Fabros lived by the discipline and lifestyle of a warrior even as he never ceased telling his family of how great it was to fight for one’s country.

“I could see the genuineness of joy in him when we attended gatherings of war veterans,” Ella Gandalera said of her father who had lived with her family in Barangay Calaanan in this eastern Nueva Ecija town since the early 1990s.

Fabros, a Philippine Army private under the United States Armed Forces in the Far East (Usaffe) in December 1942, died of pneumonia on Aug. 9. The Philippine Veterans Affairs Office (PVAO) had cited Fabros, who was born in Balaoan, La Union, on Feb. 13, 1901, as the oldest Filipino war veteran.

Gandalera said her father would tell them about all the risks, and fears, of being in the frontline during the Japanese siege in Bataan.

Fabros, then 41, and his group managed to escape before the American-led forces surrendered to the Japanese Imperial Army in Bataan in April 1942.

He subsequently joined the guerrillas in Central Luzon who fought the Japanese soldiers until 1945.

In an interview in May, Fabros told the Inquirer that he fought in Quezon and Bataan after he was recruited into the Army by a certain Lieutenant Pelagio during the war.

“I was given a rifle and bullets to defend Bataan,” he said.

“We were in Bagumbayan (Luneta) rejoicing with the American soldiers when the war ended,” Fabros said.

Gandalera said her father endured all kinds of hardships during the war. “He told us that while on the run, from Corregidor to Capas, they would eat whatever edible leaves they could find when they were hungry,” Gandalera said.

“They would drink their sweat that was squeezed from their drenched clothes or sip carabao urine,” she added.

“But he was always told us that there is no greater feeling than serving one’s country,” said Gandalera, 55, the youngest of Fabros’ four surviving children.

After the war, Fabros focused on raising his family with wife, Emiliana, and became a farmer in Nueva Ecija.  His wife died in 2000 at the age of 80.

Gandalera said her father preferred food gathered from the wild and observed strict rules on almost everything.

“He preferred wild animals like monitor lizards (bayawak) and native deer (usa). When it came to fish, he prefered goby (biya) caught in the river,” Gandalera said.

She said her father did the hunting and fishing during his younger years. Their village is near the Sierra Madre mountain range.

When Fabros developed poor eyesight in his later years, he would insist in going with his children to the market so he could smell and touch the fish and meat that they would eat.

“He would not eat fish or meat that he had not chosen himself,” Gandalera said.

She said her father loved to walk around the house but did not like to be assisted.

Fabros’ only complaint before his death was the recurring pain in his leg because of rheumatism, she said.

“He usually slept at 8 p.m., then would wake up three hours later to drink coffee, chew his nganga (betel nut) and smoke two to three cigarettes. He would then go back to sleep and wake up at 4 a.m. and drink another cup of coffee,” Gandalera said. “He prayed daily and slept in a hammock for long hours during the daytime,” she said.

A soldier, Fabros had inculcated obedience in his children and taught them to spend their money wisely.

Gandalera said her father received a monthly pension of P6,500 from the Philippine government.

“We always brought him to the mall after getting his pension from a government bank in Cabanatuan City. He always asked for paksiw na lechon for his meal in the mall,” she said.

Gandalera said her father had let them use his money to buy a Toyota Innova in November last year to replace the family’s old Mitsubishi Delica van.

During his birthday in February this year, PVAO Administrator Ernesto Carolina acknowledged Fabros as the oldest living Filipino war veteran.