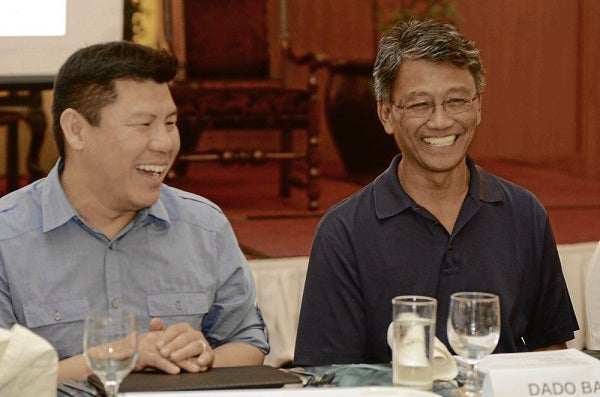 SHARING AND MENTORING Successful Filipino IT professionals Diosdado Banatao (right) and Winston Damarillo will share their insights and tips.

Some of the most successful Filipino “technopreneurs” from Silicon Valley will be coming home in October to share their insights and mentor aspiring information technology (IT) talents on how to take their genius from local to global.

The sharing and mentoring event, which will have the theme “Harnessing Filipino Innovation and Entrepreneurship” will take place from October 5-8, 2012. It will involve a  three-day mentoring camp from Oct. 5 to 7 at the Radisson Blu in Cebu City dubbed “Hack2Hatch: From Hacker to Founder.” A final forum will be held at the Manila Peninsula in Makati City on Oct. 8.

The events will be hosted by the Philippine Development (PhilDev) Foundation chaired by trailblazing computer engineer and IT venture capitalist Diosdado Banatao.

Aside from Banatao, some of the prominent personalities expected at the event are New York CEO and philanthropist Loida Nicolas Lewis, Winston Damarillo, chair and cofounder of Exist Global Inc., and Sheila Lirio Marcelo, founder and CEO of Care.com.

Other speakers will include Toby Stuart, professor of Entrepreneurship and Innovation, Haas School of Business in Berkeley, California; Arthur Tan, CEO and president of Ayala subsidiary Integrated Microelectronics, Inc.; Alvin Gendrano, director of the Developer and Platform Group for Microsoft Philippines; and Eric Manlunas, cofounder and managing partner of Diemer Ventures.

Executives from Oracle, Facebook, Google and Dell have also been invited to become speakers and mentors.

Google’s VP of Technology, Eric Brewer, will be among the speakers in the Manila forum.

At the “Hack2Hatch” event in Cebu, local start-up groups will receive one-on-one mentorship on how to present their ideas to top venture capitalists, and may even win seed money to fund and grow their business.

“The idea is that we want the investors to see that there’s  human talent capital in the Philippines. I don’t just want to show them tourist spots, I want them to see the people. We always say there’s a lot of great people in the Philippines and it is time to highlight them.  It is time to showcase that some of the best cellular phone applications are built by companies in the Philippines. All these things can be done. It is being done by Filipino engineers, with Filipino architects, in a Filipino facility,” said 42-year-old Damarillo, who is taking the lead in Cebu.

Bohol-born Damarillo, an Industrial and Mechanical Engineering Graduate of De La Salle University here, went to  work with Intel in California. Developers Connect or DevCon Philippines, which Damarillo founded four years ago, is taking the lead in the peer-to-peer mentoring sessions. Damarillo’s own Morphlabs and Exist Software Labs now have offices in Cebu.

In an effort  to replicate and share that path,  Damarillo said the only way to share knowledge and build confidence is to have the mentors sit right next to the developers—“and that’s what we’re doing in Cebu.”

“We want to let people know that it’s doable, and we want all Filipinos to say, ‘Kaya natin yan’ (We can do it). We’re ready.”

“Cebu has the potential to birth a new generation of entrepreneurs. We’re so excited,” said Damarillo.