Aquino in Vladivostok for Apec, to sell PH 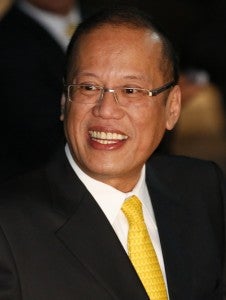 Mr. Aquino will have four bilateral meetings on the sidelines of the summit, but as of Friday, none of these will be with the president of China.

The President left Manila at 1 p.m. for the Russian port city of Vladivostok on Friday without any confirmation of his much-anticipated meeting with Chinese President Hu Jintao.

Mr. Aquino flew in at 9 p.m. (Vladivostok time) on board one of Philippine Airlines’ brand-new Airbus A320 planes.

“We have no final confirmation on that [meeting with Hu],” Communication Secretary Ricky Carandang told reporters at Ninoy Aquino International Airport in Manila before the presidential entourage took a Philippine Airlines chartered flight to Vladivostok.

“We’re hoping that by the time the President gets to Vladivostok, his schedule had been ironed out,” Carandang said.

If the meeting goes through, it will be the first between the two leaders since President Aquino’s state visit to China in August 2011 and since the two countries stepped back from a maritime standoff over Panatag Shoal (Scarborough Shoal) in the West Philippine Sea (South China Sea) in June.

Both countries are exerting efforts to ease tensions over their rival claims in the West Philippine Sea, and Mr. Aquino has no plans to bring up the dispute in his meeting with Hu.

But Foreign Affairs Undersecretary Laura del Rosario told Malacañang reporters last week that if Hu brought up the dispute, Mr. Aquino would explain to him what the Philippines was doing to “de-escalate” tensions and reiterate the country’s desire to maintain economic relations with China.

If Hu does not raise the dispute, Mr. Aquino will talk about reinvigorating trade between the Philippines and China, Del Rosario said.

On this P15-million trip, Mr. Aquino promised to take up “timely issues” with the Philippines’ neighbors and make the most of the two-day Apec leaders’ summit on Russkiy Island off Vladivostok to push trade and sell the Philippines to investors.

In his brief predeparture speech, Mr. Aquino outlined the importance of his attendance in the summit.

“In Apec, we will aggressively present the opportunities in the Philippines so that they will be further encouraged to do business in our country,” Mr. Aquino said. “Every capital that they bring in is an added foundation for a stronger future of our people,” he said.

“Be assured that in being one with the Apec economic leaders meeting in Russia, we will spend every minute to bring our national goals closer to realization. Our vow will remain the same: in our every travel, nothing drives us more than to bring good news on our return,” he said.

Mr. Aquino said the Apec meeting would also be a venue for him to meet leaders of Apec member-countries, and “further strengthen our ties toward progress.”

“On top of this, there are timely issues that we wish to bring up with our neighbors taking part in the summit,” he said, but did not go into specifics.

Carandang declined to explain the issues to reporters, but said “the real action will be in the bilateral meetings.”

The Philippines, Singapore, Malaysia and Vietnam are members of the 10-state Association of Southeast Asian Nations, which US State Secretary Hillary Clinton has urged to present a united front in dealing with China over territorial disputes in the West Philippine Sea.

Clinton left Brunei on Friday for Vladivostok to represent the United States in the Apec leaders’ summit. US President Barack Obama skipped this year’s summit to attend the Democratic Party Convention in North Carolina, which has picked him as its candidate in November’s presidential election.

Mr. Aquino will also take part in the Apec Business Advisory Council, which will take up trade and investment.

“It’s important to take part in this kind of meeting because we’re aware that no country in the world, no matter how big or small on the map, is capable of achieving progress by itself,” Mr. Aquino said.

A statement from Malacañang quoted Executive Secretary Paquito Ochoa as saying the government was spending P15.3 million for the President’s trip to Russia.

The expenses cover accommodations, transportation, food and equipment, among other things, for the President and his entourage.

On Thursday, Undersecretary Del Rosario reported a “mutual request” between the Philippines and China for a bilateral meeting between Mr. Aquino and Hu. She said, however, that there was no definite schedule yet.

The Philippine government was not giving up on a meeting between the President and Hu.

Mosquera also could not say whether one of the meetings being arranged was with Taiwanese President Ma Ying-jeou. “I have no information on that at this time,” Mosquera said. With a report from TJ Burgonio