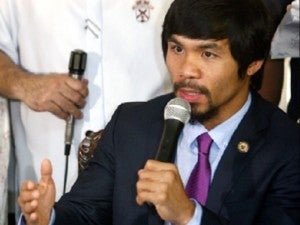 The Department of Trade and Industry is sending boxing champ Manny Pacquiao to the US to lobby American legislators for the passage of the Save Our Industries Act (Save Act), a bill expected to give the Philippine garments industry a much-needed boost.

Trade Undersecretary Cristino L. Panlilio told reporters they were sending Pacquiao to the United States together with the Philippine trade attaché to seek the support of the legislators in Washington for the landmark legislation.

“I hail the filing of this bill. This is something we have worked hard for since last year. The Department of Foreign Affairs, led by Foreign Secretary Albert del Rosario and our new ambassador to the US Jose Cuisia Jr., have also adopted the Save Act,” Panlilio said.

“This is a major step, but the work is not over. We must work harder now to convince more senators and congressmen to support this bill. We are calling on all Filipinos who have relatives in the US to please inform them about the Save Act. They can do their share by getting in touch with their senators and congressmen,” he said.

Trade Secretary Gregory L. Domingo noted that the filing of the Save Act was a “great development as it is a big step toward achieving our goal of invigorating the garments industry.”

Panlilio earlier said the passage of the measure would benefit both the US textile industry and Philippine garment manufacturers.

“This is a landmark piece of legislation that will redound to great benefits for both our people. It will revive the Philippine garment industry, which has been in the doldrums since the end of the quota regime. At the same time, (it will) increase exports of US textiles to the Philippines and other Asean countries to up to $500 million. This definitely is a win-win solution,” Panlilio had said.

The Save Act is expected to provide enough incentives for garments exporters in the Philippines to expand their operations through a grant of preferential treatment from the United States.

The bill supports the country’s inclusion in the 809 Program, which gives various benefits to US trading partners that produce garments from US-made fabrics or yarn.

Garment manufacturers from Mexico, the Caribbean and Andean countries already enjoy preferential treatment, with benefits ranging from lower duties to quota-free and duty-free entry into the United States.

Under the 809 component of the bill, US-made yarn and fabrics cut and wholly assembled in the Philippines would qualify to reenter the US duty-free.

Garments made of US spun yarn or extruded yarn formed in the Philippines, on the other hand, would be allowed to reenter the US at half of the most favored nation (MFN) duty.

Read Next
New anti-China protest in Vietnam
EDITORS' PICK
Current dominant strain of COVID-19 more infectious than original—study
Smart releases Hyun Bin’s second TVC
DOLE: Return of OFWs’ remains from Saudi to be ‘delayed,’ deadline moved to ‘early next week’
‘Justice will be done,’ Duterte assures as he vowed probe on Jolo incident to bare ‘truth’
EuroMillions Superdraw: A lottery draw unlike any other is coming to the Philippines
Water remains our saving grace right now
MOST READ
Locsin warns of ‘severest response’ if China’s army drills in SCS ‘spill over’ to PH domain
Duterte tells military: No other president looked at you the way I did
BREAKING: Duterte signs anti-terror bill into law
‘Very timely, historic’: Senators laud passage of anti-terror bill despite ‘pressures’
Don't miss out on the latest news and information.