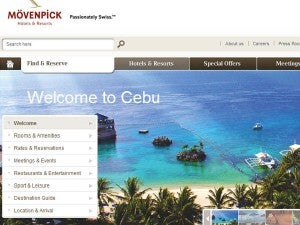 He may not be part of the crew who will serve some of the world’s most powerful men and women  attending a summit in a former Russian military fortress, but 25-year-old Filipino waiter Joey Echavez is visibly thrilled about being part of this annual meeting of leaders of the  Asia Pacific Economic Cooperation (Apec) forum.

“It’s my first time out of the country and I’m really excited about having a role in this important event,” Echavez said. “This is a once in a lifetime experience for me.”

Echavez is among 72 staff members of the Cebu-based Mövenpick Resort and Spa, which has been tapped to provide a substantial part of the workforce in the 24th Apec Economic Leaders Conference on Russky Island off the port city of Vladivostok in Russia.

Echavez said his fellow service crew from Mövenpick were chosen in June to go to Russia after the official tasked to oversee this year’s Apec summit paid a visit to the Mactan Island resort  earlier this year and was impressed  by the hotel’s efficient, courteous and English-speaking staff.

Vladivostok is a sister city of Cebu and the Russians are the fastest growing group of tourists going to Cebu.

The Mövenpick crew will man three dormitory buildings that were converted into hotel rooms as waiters, housekeeping, front desk assistants and bellhops.

Echavez said that aside from Filipinos, there were Korean service staff hired to complement the Russian workforce for the event.

Each Filipino crew member expects to bring home at least P50,000 net of food and lodging, “which is not bad for a one-month contract,” Echavez said.

He said the foreign assignment was timely considering that the Mövenpick resort, owned by Manuel Osmeña, who also runs Sky Logistics and Sky Kitchen, which provides  in-flight food service for  Philippine Airlines, was closed in June for renovation that would cost P200 million and be completed in five months.

Meanwhile, Philippine Ambassador to Russia Alejandro B. Mosquera said the Philippine delegation would do well to use its experience in the Vladivostok summit for the country’s preparations for hosting the Apec meeting in 2015.

Being considered in the search for a venue for the meeting are Clark, Subic, Amanpulo resort in Palawan and Boracay Island.

The Philippines hosted the Apec summit in 1996, building villas in Subic where world leaders were billeted.

“Our experience here, of course, will give us an idea on how we are going to prepare the infrastructure, the human resource that is needed, the needs of the delegates, other areas like facilities: Hotels, services, restaurants,” Mosquera said.

“I think our people working for this Apec conference have a good grasp, good idea of how the preparations were made,” he said. “And, of course, the expenses they have made for building the infrastructure and early preparations would be to our advantage.”