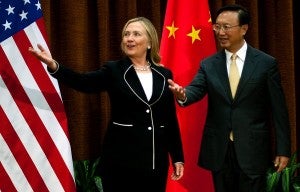 Chinese Premier Wen Jiabao, right, and US Secretary of State Hillary Rodham Clinton shake hands at the Ziguangge Pavilion in the Zhongnanhai leaders’ compound in Beijing, Wednesday, Sept 5, 2012. China and the US stepped back on Wednesday from sparring over the tense South China Sea as the Asian power told Secretary of State Hillary Clinton it would work on a code to manage disputes. AP PHOTO/FENG LI, POOL

BEIJING—China and the United States stepped back on Wednesday from sparring over the tense South China Sea as the Asian power told Secretary of State Hillary Clinton it would work on a code to manage disputes.

China did not budge on its claims on the South China Sea, which the Philippines calls West Philippine Sea, but both Beijing and Clinton took a conciliatory tone after weeks of escalating tensions in the strategic waters where Southeast Asian nations have been increasingly alarmed.

Foreign Minister Yang Jiechi said that China had “plentiful historical and jurisprudential evidence” for its claims to virtually all of the South China Sea, but sounded upbeat on Clinton’s calls for a code of conduct.

Welcoming Clinton in the imposing Great Hall of the People, Yang pointed to his recent tour of several Southeast Asian nations and said that China agreed on the need to “work towards an eventual adoption of a code of conduct” on the basis of consensus.

Yang said, without elaborating, that he hoped for “success” at the East Asia Summit in November in Cambodia. Clinton has said that she wanted to see progress on the code in time for the summit after talks in July by Southeast Asian foreign ministers failed to make headway.

Clinton said it was “in everyone’s interest” for China and the 10-member Association of Southeast Asian Nations to seek a code, which would establish rules and means of dialogue to prevent incidents from escalating into full-blown conflict.

She denied charges that the growing US military and political focus on Asia was aimed at containing China, saying that President Barack Obama’s administration did not want “unhealthy competition.”

“Both President Obama and I have said frequently that the United States welcomes the rise of a strong, prosperous and peaceful China,” said Clinton, who spoke with Yang on Tuesday at a dinner that stretched past midnight.

The Philippines and Vietnam have accused an increasingly assertive China of running a campaign of intimidation to exert its claims in the South China Sea, through which around half of the world’s cargo passes.

The United States has rallied behind the Southeast Asian nations and sharply criticized Beijing’s recent establishment of a remote garrison in the South China Sea, through which half of the world’s cargo flows.

Yang said that China, in its claims to the bulk of the South China Sea, would assure freedom of navigation within it.

“For China and our neighboring countries, the South China Sea is really a lifeline for exchanges, trade and commerce. There is no issue currently in this area, nor will there ever be issues in that area in the future,” Yang said.

The show of conciliation stands in marked contrast to the tone of China’s state-run press which has ripped into the United States almost daily ahead of Clinton’s visit.

Just as Clinton was meeting Chinese leaders, the overseas edition of the People’s Daily warned Wednesday against the United States “sowing discord” among China’s neighbors, calling such a strategy “a counterproductive waste.”

Yang, when asked if he shared the dire media assessments of US intentions, said: “Nowhere else do China and the United States share more converging interests and interact more frequently than in the Asia-Pacific region.”

On the bloodshed in Syria, Yang said that China supported a “transition” and was not attached to President Bashar al-Assad but warned against outside interference and said that history will judge China’s position positively.

Clinton repeated criticism of China, and Syria’s main backer Russia, for vetoing UN draft resolutions that would have pressured Assad to end the conflict, which activists say has killed more than 26,000 people.

Clinton met President Hu Jintao and much of the top leadership but Vice President Xi Jinping – who is expected to take power next year – called off talks at the last minute.

While China has in the past used abrupt cancellations to show displeasure, the two sides played down the absence of Xi, who also called off other meetings, and had made friendly gestures during a visit to the United States this year.

China scheduled the meeting with Li to ensure that Clinton meets with a key figure in the leadership transition, a US official said.