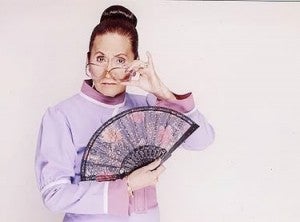 WANBOL CAMPUS, Cubao– After months of silence, top officials and more than 200 faculty members of Wanbol University spoke out in defense of beleaguered Sen. Tito Sotto, known as the institution’s most distinguished alumnus.

Speaking at a press conference outside her office on the Wanbol campus, President Liwayway Gawgaw Tapia, known as Miss Tapia, angrily called the attacks against the senator “a malicious attempt to discredit a man of integrity, an honorable leader of the republic.”

“We’ve had enough!” Miss Tapia, who was surrounded by faculty members and students, said. “The Wanbol community condemns these vicious insults against one of our own. We call on all citizens to rally with us to defend the senator.”

Senator Sotto has been accused of plagiarism and dishonesty for using material from a blog without acknowledging his sources. But Professor Vic Ungasis, president of the academic senate, called the allegations misguided, calling Sotto “one of the most brilliant minds to come out of this institution of higher learning.”

He said the senator’s use of a blogger’s material in a speech must be understood in the context of Wanbol’s “unique and innovative academic tradition.”

“Many of today’s universities cling to an outdated concept of ‘copyright,’ and academic scholarship,” he said. “Wanbol follows a more forward-looking view. We affirm one’s ‘right to copy’ without being burdened by footnotes and attributions which, let’s be honest, are really so 20th Century.”

Ungasis, who has a PhB in comedic studies explained that “Wanbol embraces an open-source, freestyle approach to academics and education.”

“We call this worldview ‘Dexterous, Uninhibited, Generously Accessible Scholarship,’” he continued. “Or, as it is simply referred to on our campus, D.U.G.A.S.”

Wanbol’s D.U.G.A.S. tradition, he argued, is “effective, efficient and environmentally-friendly.” “By doing away with footnotes and citations, and even bibliographies, we’ve helped save trees by not using too much paper,” he said.

On the Wanbol campus, Ungasis proudly declared, Sotto was “most definitely the master of D.U.G.A.S.”

Miss Tapia also lashed out against the many Facebook and Twitter posts making fun of the senator. She said she was particularly outraged by a photo circulating on Facebook showing Sotto looking at a seatmate’s test paper.

“That’s obviously a fraud,” she said. “And we can prove it. We have had many foreign students – but we’ve never had one who’s blonde.”

“Ay naku, what can you expect from people who can’t even pronounce their own school’s name,” she snorted. “Arrneow? It’s ATEN – YO, you morons!”

Miss Tapia also railed against a blogger who claimed that Tito Escalera was behind the demolition job against Sotto. She said the “uninformed and unintelligent” writer “clearly did not know what he was talking about.”

“Sotto is, in fact, Escalera and vice versa,” she said. “What can you expect from a classless, dim-witted blogger writing for a network named after a disgraced president and about to be owned by a no-good – “

Miss Tapia stopped suddenly as she was interrupted by Professor Ungasis who leaned over and whispered something.

“Ah, what President Tapia was saying was she’s sure the network will become more respectable under new management,” Professor Ungasis said.

“And maybe it can even re-broadcast or perhaps even do an authentic remake of ‘Iskul Bukol,’ with the original cast,” Miss Tapia said, smiling. “I’m really disappointed that so many Filipinos have not heard of us. They can just go to our Web site.”

The Wanbol University Web site can be found here. Iskul Bukol was the famous reality show that documented the rise of the legendary university.

Mang Temi agreed that a remake of the show with the original cast would be an excellent way to educate Filipinos about Wanbol’s fun-loving tradition and its patented D.U.G.A.S. approach to education.

However, Mang Temi also said that the title of the program should probably be modified. “With the old title, Wanbol comes across as silly and good-for-nothing university,” he said.

“I have an idea,” Professor Ungasis said. “How about ‘Iskul Be Cool.’”

“Alang katapat!” Mang Temi also chortled, as the three university officials, followed by hundreds of students and faculty, began walking toward the Wanbol cafeteria, while singing the school’s hymn.