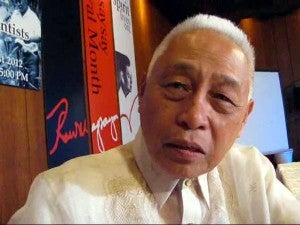 Chen Shu-Jiu from Taiwan, Kulandei Francis from India, Syeda Rizwana Hasan from Bangladesh, Yang Saing Koma from Cambodia, and Ambrosius Ruwindrijarto were the other awardees.

The award “is given to persons – regardless of race, nationality, creed, or gender – who address issues of human development in Asia with courage and creativity, and in doing so have made contributions which have transormed their societies for the better.”

During the opening of the ceremony, the late Interior secretary and 2000 Ramon Magsaysay awardee for government service Jesse Robredo was honored with an audio visual presentation as tribute.