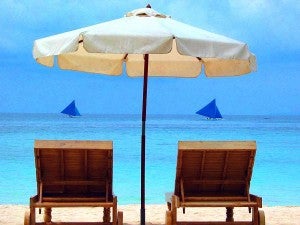 On his first-ever visit to  Boracay Island, President Benigno Aquino on Saturday committed a no-no for a group of Boracay residents.

In his 12-minute speech at the inauguration of a refurbished Caticlan airport in this town, the jump-off point to Boracay, Aquino referred to the island resort using the abbreviated name “Bora,” three times.

This drew reactions from a group of Boracay residents who had launched a campaign—“Boracay Please, Not Bora”—which urges visitors to refer to the island using its complete name so as not to confuse it with Bora-Bora, an island in the French Polynesia chain in the Pacific Ocean, also a popular tourist destination.

“We welcome the President to Boracay and we hope he will find time to enjoy the beauty of the island. But we appeal to him to call it Boracay and not Bora,” said Nenette Aguirre-Graf, a resort owner and native of the island.

“It took Boracaynons and the first batch of expats more than 20 years ago to make Boracay the Philippine’s premier tourist destination. Why rename it?” the group said on its Facebook account.

The abbreviated name has commonly been used even by local tourists, especially in text and on-line messages.

The municipality of Malay, which has jurisdiction over Boracay Island, has prohibited the use of the abbreviation “Bora” for the popular island resort in promotional materials and business activities.

In a resolution passed during its regular session on February 22, the council mandated the municipal licensing office to deny applications for permits from the municipal mayor and for business operations which use the name “Bora” instead of “Boracay.”

In its resolution, the municipal council noted that there has been a proliferation of advertising and promotional materials using the abbreviated name of the island.

The wide use of “Bora” could be detrimental to the business and economy of  Malay which largely rely on Boracay’s P13-billion tourism industry, according to the council.

The council will pass an ordinance to enforce the resolution, which it said aims to preserve and uphold the name of Boracay.

Aquino said he was glad that he finally was able to visit the island, which he had seen only in  pictures of his mother, the late former president Corazon “Cory” Aquino.

But he said that despite an invitation for him to stay overnight on the island, he had to return to Manila after the inauguration to inspect and attend to flooded areas in Metro Manila.

He said he would have wanted to enjoy the island’s famous fine sand and clear waters and also to taste the popular food and drinks like the “chori-burger” and “Jonah’s fruit shake.”

Aquino canceled a press conference after the ceremony but flew in a presidential chopper to the posh Shangri-la Boracay’s Resort and Spa located at the northern end of the 1,032-hectare island where he had lunch before returning to Manila.