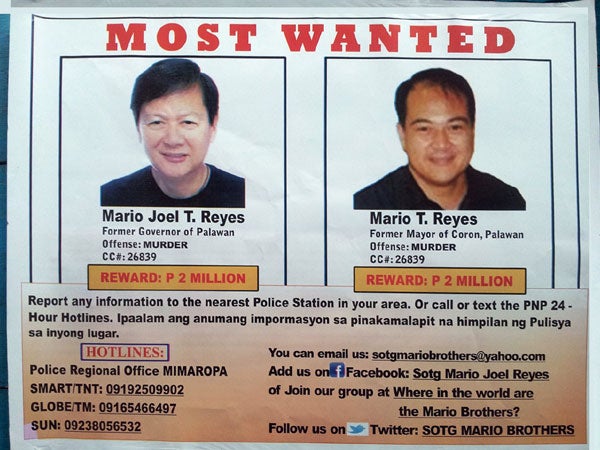 A hooded man claimed Wednesday he drove former Palawan Governor Joel Reyes and his brother to Ninoy Aquino International Airport (Naia) where they boarded a plane to Vietnam, purportedly facilitated by immigration personnel, to evade prosecution for the murder of environmentalist Gerardo Ortega in January 2011.

The unidentified man was presented Wednesday by former Solicitor General Francisco Chavez and Sandra Cam of the Whistleblowers Association of the Philippines at a weekly media florum at Club Filipino.

They alleged that agents of the Bureau of Immigration (BI) helped to spirit out of the country Reyes and his brother Mario Jr., a former mayor of Coron, along with their lawyer Hermie Aban, who has reportedly disappeared. The agents were identified as Rodelio Udarde, said to be a friend of Aban, and Wesley Gutierrez.

Immigration Commissioner Ricardo David Jr. has ordered the relief of Udarde and Gutierrez pending an investigation, according to BI spokesperson Maria Antonette Mangrobang. However, she said the bureau could only confirm the departure of Reyes.

Mangrobang said the bureau was coordinating with Vietnamese officials to secure records of those who arrived there from the Philippines on March 18. Officials of the BI and the Department of Foreign Affairs earlier said that Reyes left Naia on a Cebu Pacific flight on that day, using a passport under the name of Joseph Lim Pe.

“(I) pity our President. (His) advocacy is the straight path, but who are those around him? All of them are stained with mud,” Cam said, outlining what she described as a “grand conspiracy” to help the Reyes brothers escape prosecution.

The disclosures came three months after the Philippine National Police dangled a P300,000 cash reward for any information leading to the arrest of the Reyes brothers in addition to the P1.55 million previously offered by several private individuals and groups.

“All of this would not happen if we had a strong and honest leadership in the Bureau of Immigration,” Chavez said.

As Chavez and Cam spoke, the man who was covering his face with a cloth, remained quiet until reporters started asking him questions.

Chavez and Cam said they did not identify the man for security reasons, that they would arrange lodging for him in a Church institution.

They said they could not put him on the government’s witness protection program because the immigration bureau is part of the Department of Justice.

The man said he was a former driver of Udarde, described as an immigration officer and a friend of lawyer Aban. He said he drove the brown Montero Sport, with Plate No. TAE-676, and on several trips took the Reyes brothers to the Naia Terminal 3 arrival area, and separately Aban and Udarde, who the man suggested helped the brothers flee.

The man said Aban later gave him a thick bundle wrapped in a newspaper and was told to give it to Udarde who he had earlier fetched from his house at BF Homes in Parañaque City. He said he didn’t know if the bundle contained money. Chavez said Reyes gave the driver P2,000 for coffee before the governor left him.

Chavez said that in a written statement executed by the hooded man, Aban left the country for Vietnam with the brothers and then returned to the Philippines.

Based on the documents presented by Cam to reporters, which purportedly came from the immigration office of Vietnam, Aban left Vietnam on March 20, two days after he left with the Reyes brothers, according to Chavez. He said that on Aban’s return, the same driver fetched him at the airport.

“They proceeded to Udarde’s house because he (Aban) would reportedly get his share of the money,” Chavez explained.

Chavez said that according to the driver’s affidavit, he was given by Udarde another P10,000 for him not to say anything.

According to Cam, the former governor used the name Joseph Lim Pe, based on a purported Cebu Pacific manifest.

Cam said that she talked to a security guard named Wesley Gutierrez, who reportedly admitted signing the departure slips of both the former governor and Aban.

“Where have you seen a security guard … vested with the power of an immigration officer. You can deny or approve the departure of a passenger,” Chavez said, as he called on the Senate and the House of Representatives to look into the area of legislation pertinent to the issue now presented.

He also called on the head of offices of the Bureau of Immigration and the agency’s spokesperson to resign.

“If you do not know these things happened, then two things can happen. It’s either you’re grossly incompetent for the job, or you’re part of the job. Either way, you have no business continuing service there. You have to resign,” Chavez said.

She said that there was no record based on Philippine immigration records of the Coron mayor leaving the country, but added that she was positive he had already left.

Cam showed a document she allegedly retrieved from the Vietnam immigration office through a friend that indicated that a certain Mario Reyes Jr., Pe and Abon entered the country on March 19.

The same document purportedly showed that the brothers left Vietnam on March 21 for an unknown destination.

Based on a supposed Cebu Pacific manifest Cam presented to reporters, the three left the country via Cebu Pacific Airlines Flight No. 5J751 bound for Ho Chi Minh City at 10:50 p.m. Aban was reportedly seated on 29F, Reyes on 29E, and his brother Mario on 29D. With a report from Redempto Anda, Inquirer Southern Luzon