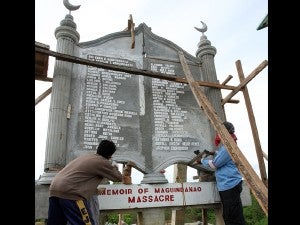 MANILA — Another relative of one of the 32 media workers slain in the Maguindanao massacre has left the country.

Reynafe “Nenen” Momay-Castillo flew abroad, on Monday, to work as a nurse in an undisclosed location “for the future of her family,” the National Union of Journalists of the Philippines (NUJP) said.

Castillo is the daughter of journalist Reynaldo Momay, whose remains have yet to be found since the grisly slaughter of 58 people in November 2009.

Rowena Paraan, NUJP secretary general, said Castillo decided to leave the country with her husband and their two children after she was finally accepted for the job she had applied for in 2006.

While Castillo’s decision would not affect the multiple murder case filed against members of the once poweful Ampatuan clan, Paraan said the campaign to seek justice for the massacre victims “has lost a feisty and articulate leader.”

“As compared to the other relatives of massacre victims, Nenen was very brave and assertive. She knew she had to be extra forceful to remind the government of the case of her father,” Paraan told the Philippine Daily Inquirer

“She was feisty and very committed to the cause. She understands very well the issue of impunity in connection with the killings of journalists in the Philippines,” she added.

On Sunday night, Paraan and other NUJP members met with Castillo to bid her goodbye. Paraan said Castillo assured them that her mother would attend the hearing of her father’s case.

The NUJP official said Castillo lamented the inaction of the Department of Justice (DOJ) on her plea to have the case of her father included in the criminal complaint filed against the Ampatuans and their co-accused.

“I know how difficult it was for her to leave the country even before the DOJ could resolve the murder of her father,” Paraan said.

Last month, Myrna Reblando fled the country and sought political asylum in Hong Kong for the government’s supposed failure to secure her and her family. Interestingly, Reblando had endorsed the candidacy of then Sen. Benigno Aquino III in the 2010 presidential elections and even appeared in his political campaign ads.

In an interview with interaksyon.com, Castillo assured the family of other massacre victims that she was not threatened or paid to leave the country. “I know that there will be doubts regarding my decision. Some may think that I indeed received P10 million,” she said in Filipino. “But I have not received anything and I will not accept anything (from the Ampatuans).”

She said she opted to work abroad “because we also need to make a living for our family for our future.”

“While it is hard to admit that we are losing hope with how the case is going, we hope (the government will) prove to us that there really is justice in the Philippines. The justice we are asking for will give us peace and will put our minds at ease.”