Navy ships ready to sail back to Scarborough Shoal 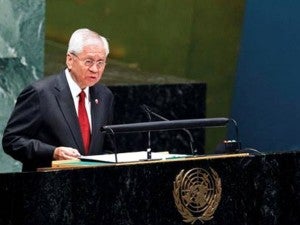 Del Rosario also said a report on the latest reconnaissance flight over the disputed territory reveal that three Chinese vessels remain near the shoal and the area was still roped off.

“I think that impediment on the mouth of the shoal is still there,” Del Rosario told reporters on the sidelines of the Department of Foreign Affairs Eid’l Fitr reception Thursday night.

Del Rosario said President Aquino was waiting for the weather to improve in the area before ordering Filipino vessels to return to the shoal.

“The President believes that this is not the proper time because of the very bad weather. We’re waiting for better conditions,” he said.

Del Rosario also reiterated international concern over China’s establishment of Sansha City, a military garrison that is supposed to govern all of Spratlys.

In June, the Philippines pulled out vessels from the shoal, a rock formation surrounded by a lagoon said to be rich in natural resources, after at least two months of a tense standoff with China.

In April, the Philippine Navy found Chinese fishermen believed to have collected corals and endangered marine species near the shoal. Chinese authorities in surveillance ships barred Filipino sailors from apprehending the fishermen, sparking an impasse that has dragged on for months.

Chinese vessels have been spotted many times in the area and their fishermen have been caught collecting marine resources since the ‘90s.

The dispute over Panatag Shoal continues as the Philippines also asserts its right over part of the Spratlys, the resource-rich West Philippine Sea (South China Sea) territory wholly claimed by China.

Del Rosario is keen on continuing his international campaign for a peaceful resolution of the dispute in the coming weeks, scheduling visits to Southeast Asian ministers this month while preparing to address the United Nations General Assembly on the issue in September.