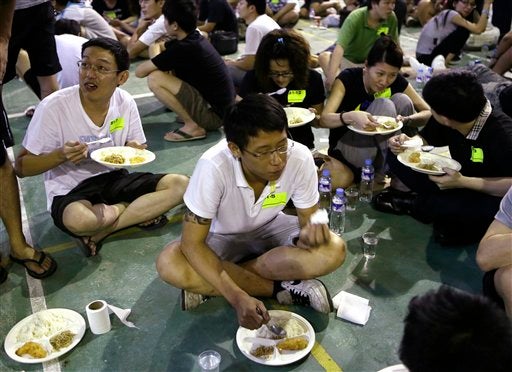 Some of the 357 Taiwanese and Chinese nationals eat a meal as they wait to be processed after being rounded up for alleged involvement in an illegal online scam, in a gymnasium at the Philippine National Police’ Camp Vicente Lim in Laguna province on Thursday Aug. 23, 2012. The mostly Chinese and Taiwanese suspects were arrested in simultaneous raids on 20 houses in metropolitan Manila and nearby Antipolo city for alleged involvement in a cyber-crime syndicate. AP PHOTO/BULLIT MARQUEZ

MANILA, Philippines—More than 300 foreigners, suspected members of a cybercrime and human trafficking syndicate, were arrested in simultaneous raids in Quezon City, Marikina City, and Cainta and Antipolo City in Rizal province on Thursday.

The Criminal Investigation and Detection Group (CIDG) said among those arrested were the two suspected financiers of a group involved in credit card fraud and human smuggling in Taiwan and China.

“[This is] the biggest and most resolute operation carried out by law enforcement units in the history of anticyber crime drive [in the Philippines],” Director Samuel Pagdilao Jr., CIDG chief, said in a statement.

“The raids … demonstrate the strong will of the authorities to [run after] these foreigners who have made the country their base of criminal operations,” he added.

Pagdilao said a total of 357 Chinese and Taiwanese were taken into custody during the raids conducted by the CIDG, the Presidential Anti-Organized Crime Commission (PAOCC) and the Naval Intelligence and Security Force.

Arrested during the operations, which were covered by search warrants issued by Manila Regional Trial Court Judge Marino de la Cruz Jr., were Chinese-Filipino Maria Luisa Tan and Jonson Tan Co, said to be the financiers of the group, Pagdilao said.

The raiding team also confiscated various telecommunications gadgets and equipment which the syndicate purportedly used in their illegal activities.

Chief Supt. Reginald Villasanta, PAOCC executive director, said the suspects, who were charged with violation of the Access Devices Regulation Act of 1998, were taken to the Police National Training Institute in Camp Vicente Lim in Calamba City, Laguna province.

Because of the sheer number of those arrested, Villasanta said the police training school’s gym had to be turned into a makeshift detention facility.

“This is undoubtedly one of the largest antifraud stings in the Philippines in recent years,” Villasanta said.

“Using the Internet, members of the syndicate [would] claim to represent [the Chinese] police, prosecutor’s office, courts, insurance companies, banks and other financial institutions when they call their victims,” he said.

Villasanta said the suspects would tell their unsuspecting victims that their personal bank accounts were under investigation for supposedly being used in money laundering and terrorist activities.

According to the CIDG’s deputy director for operations, Senior Supt. Keith Singian, the group’s modus operandi “is a classic example of the operations of criminal syndicate in China, only this time, the suspects who are foreigners have used the Philippines as base of operations.”

“Many of the victims agreed [to transfer their money] out of fear and anxiety,” Villasanta said. “The syndicate made at least P20 million a day through this kind of modus [operandi].”

He said the Chinese police discovered that the syndicate had transferred to the Philippines when they traced the Internet Protocol address that the suspects had used to contact their victims.

Villasanta said the group had been victimizing residents of Taiwan and mainland China since 2007.

“An initial investigation revealed that the arrested suspects have links with an international fraud syndicate that operates in the Philippines and abroad,” Villasanta said.

Senior Supt. Keith Singian, CIDG operations chief, said the modus operandi of the arrested foreigners was similar to the activities of 37 Chinese nationals who were arrested in May by the CIDG for hacking international gateway facilities and engaging in financial fraud.

“Following the crackdown on the group by the Chinese authorities in 2010, [the syndicate] moved their operations outside China and continued … victimizing Chinese nationals through the Internet,” Singian said.

In Marikina City, Senior Supt. Gabriel Lopez, chief of police, told the Inquirer that 18 males and four females were arrested in a house on Moscow Street in Loyola Grand Villas.

The house, he said, was owned by a Filipino, but he refused to reveal his identity. The foreigners, Lopez said, were paying monthly rent to the owner.

Lopez said the house was made to look like a call center, with numerous phone lines and telephones inside. “You know how legal call centers are. This one is obviously not legal since they use the phone lines of other people,” he said.

More than 300 telephones were also confiscated by the police.

At Filinvest subdivision in the municipality of Cainta, several houses were raided by the CIDG in collaboration with the local police. A CIDG source said the raid resulted in the arrest of more than 100 foreigners.—With Jamie Marie Elona, INQUIRER.net