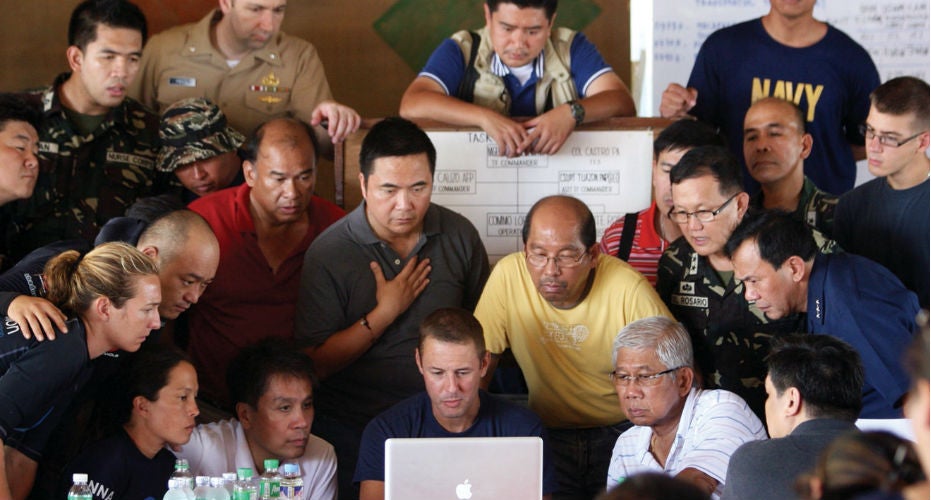 GRIPPING VIDEO All eyes are glued to the computer screen as volunteer diver Matt Reed shows the video of the discovery of the plane wreckage and the body of Interior Secretary Jesse Robredo. Among those watching at the command center were Transportation Secretary Manuel Roxas, Budget Secretary Florencio Abad and Defense Secretary Voltaire Gazmin. NIÑO JESUS ORBETA

CEBU CITY—The three technical divers from Malapascua Island, a popular diving spot in northern Cebu, succeeded in locating the ill-fated Piper Seneca plane used by Interior Secretary Jesse Robredo, because of their training and experience, according to their associate.

Matt Reed, 35, a British partner in a dive resort called Evolution in Malapascua, was diving with Anna Cu Unjieng, 37, a Filipino, and Shelagh Cooley, 29, an American, when he found the plane’s fuselage and Robredo’s body Tuesday morning at a depth of 50 meters in Masbate Pass.

In a text message sent to the Philippine Daily Inquirer Tuesday night, Reed declined to be interviewed. “Once the recovery effort is completed, then I will be happy to discuss it. Thanks for your understanding,” he said.

His Irish partner, David Joyce, 39, said in a phone interview Tuesday afternoon, that he would have wanted to join the Evolution team. “I discussed it with my wife, Emma, who is to deliver our baby anytime and I decided not to join them.”

Chief Supt. Vicente Loot, a Cebuano police official assigned to Eastern Visayas, said he contacted the three technical divers on Monday and asked for help in the search-and-rescue mission. He said he had been directed by police headquarters in Central Visayas to locate the divers.

According to the Evolution website, technical diving goes beyond the limits of recreational diving—a maximum depth of 130 feet or 40 meters, no decompression and always having direct access to the surface. This requires proper training and specialized equipment to be able to dive deeper, Joyce explained.

The divers must bring four tanks containing different gases, rebreather units and regulators (some for decompression use), he said. A rebreather allows the gas a diver exhales to be processed so it can be inhaled again.

Joyce said that returning to the surface should be precise and slow, taking 90 minutes to two hours or three meters per minute.

Loot said he assisted Reed, Unjieng and Cooley in carrying their diving equipment and facilitated their flight to Masbate at noon of Monday on an Air Force plane.

A volunteer German technical diver, however, fell ill during the deep-sea search operations. He was identified as Danny Brumbach, a consultant in a coral reef restoration project of the Philippine Council for Agriculture, Aquatic and Natural Resources Research and Development.

An engineer by profession, Brumbach designs underwater turbines that help depleted corals multiply, according to Raymund Liboro, information director of the Department of Science and Technology.

Liboro said Brumbach and his fellow divers from the Boracay Scuba Schools Association volunteered for the Masbate search.

Reed started recreational diving at the age of 17 and has been into technical diving since he was 21, according to Joyce. He became a certified diver in 1990 and completed his open water course in the Mediterranean on Gozo Island, his website said.

The London native went to Southeast Asia because of his love for diving and has over 6,000 logged dives and hits the water almost every day. He also teaches wreck diving, cave diving, mixed gas and rebreather courses.

Early this month, Evolution technical divers performed search dives at 330 feet, which was a good preparation for the Masbate mission, he said.

The Evolution website reported that its exploration unit undertook the search for a wreck thought to be the lost MV Pioneer Cebu.

The vessel, which reportedly had 262 passengers on board, was lost somewhere near Malapascua when Typhoon “Klaring” struck on May 16, 1966. With a report from Dona Z. Pazzibugan in Manila