Filipino WWII veterans give up medals to protest lack of recognition 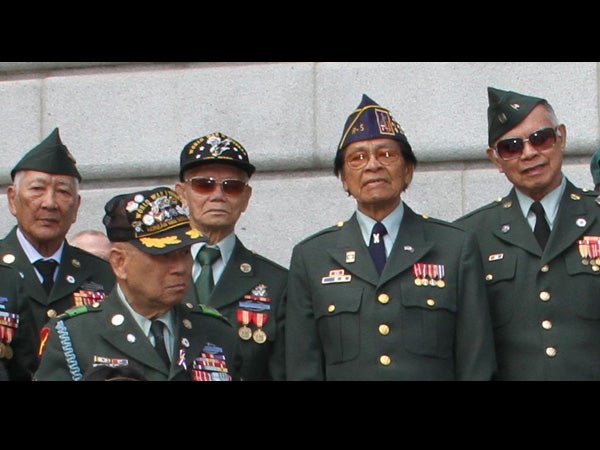 LOS ANGELES – A group of Filipino veterans have relinquished their medals and turned over their uniforms to the US government in a symbolic protest over continued denial of military benefits.

Arturo Garcia, national coordinator of the LA-based Justice for Filipino Veterans said they staged the protest in Pensacola, Florida earlier this week after Jeff Miller (Rep-Fla.), chairman of the House Committee on Veterans’ Affairs denied their request for a hearing on a bill that would expand eligibility for veterans’ benefits.

“This symbolic protest also marked the end of our two decades of lobbying,” Garcia said. “But our fight will continue in the court and on the streets.”

The veterans trooped to the office of Miller in Pensacola to ask for an immediate Committee hearing on HR 210, “The Filipino Veterans Fairness Act of 2011,” that will provide full recognition to the military service of Filipinos who fought for the US during the war. The equity bill already has 96 bipartisan co-sponsors.

“Other bills with thirteen, six, or even zero co-sponsors got public hearings – but not an equity bill that would give honor and dignity to Filipino veterans,” said 96-year-old veteran Felino Punsalan. “On behalf of my fellow veterans…I’m surrendering these medals and uniforms (to show) my protest.”

“My father served this country and though he had passed away, I want to see his gallantry fully recognized,” said Divina Herrera, daughter of a US Armed Forces in the Far East (USAFFE) veteran and president of the Filipino-American Community of Pensacola. “This is not about benefits, this is about dignity and honor.”

President Franklin Delano Roosevelt issued an executive order commissioning around 250,000 troops from the Philippines into active service for the United States during World War II.  The Filipinos were promised equal treatment as the American veterans after the war.

In 1946, US Congress enacted the Rescission Act that took away full recognition of the Filipinos out of the 66 nationalities who fought for the US.

In 2009, President Barack Obama established the $198 million WWII Filipino Veterans Equity Compensation as part of the American Recovery and Reinvestment Act. The fund allowed Filipino veterans, both citizens and non-citizens, an opportunity to apply for lump-sum payments.

But Garcia said that 24,000 veterans were denied this compensation and that the existing programs don’t provide adequate coverage in many areas. He said that this is an oversight that the Filipino Veterans Fairness Act of 2011 would address.

“There’s not enough time left. Of the 250,000 who fought in WW II, less than 41,000 are still alive. Many are dying. Just recently, a 100-year-old veteran in Nevada suffered a stroke,” said Garcia, who announced that the veterans will now step up their legal and political action. They will also launch an educational campaign to promote awareness about the contributions and sacrifices of the Filipino veterans and build support for them.

The veterans are also scheduled to hold a protest rally in Los Angeles on Nov. 11, Veterans’ Day.