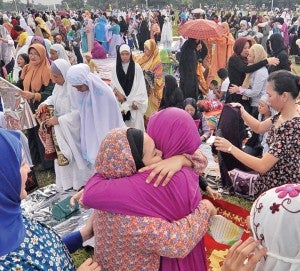 FEAST AFTER FAST Muslims embrace each other at Manila’s Quirino Grandstand as they join the Islamic world in celebrating Eid’l Fitr, which marks the end of the fasting month of Ramadan. RICHARD A. REYES

Shoppers flooded markets in India, women decorated their feet with tattoos in Pakistan, while others in the Philippines prayed for peace and the recovery of Interior Secretary Jesse Robredo, as Muslims around the world celebrated the Eid’l Fitr feast marking the end of the holy month of Ramadan.

On Sunday, thousands of Muslims—many in their traditional conservative Islamic attire—gathered to pray in public places in the five provinces covering the Autonomous Region in Muslim Mindanao (ARMM).

A congregational prayer with thousands of devotees attending was also held at the Grand Mosque in Cotabato City, the country’s biggest mosque.

Acting ARMM Gov. Mujiv Hataman led an appeal for peace and for the recovery of those affected by natural calamities and by the fighting in his region, which erupted during the season of fasting.

“We join the family of Secretary Jesse Robredo and the national officialdom in prayers for another lease in life; may he be safely rescued from the tragic plane crash in Masbate,” Hataman said.

“To me, his role in the pursuit of our reform agenda in the ARMM is beyond personal reckoning,” he said of Robredo, who remained missing after his plane crashed on Saturday off Masbate province.

The celebration of Eid’l Fitr also began in other parts of the world.

Time to serve others

In Washington, where Saturday was considered the 30th and final day of the dawn-to-dusk month of fasting, US President Barack Obama wished Muslims well.

“Michelle and I extend our warmest wishes to Muslim communities in the United States and around the world as they celebrate Eid’l Fitr,” Obama said.

“For Muslims, Ramadan has been a time of fasting, prayer and spiritual renewal. These past four weeks have also been a time to serve the less fortunate—a reminder of the obligations that people of all faiths have to each other.”

In Jakarta, as Indonesians shifted from Ramadan to a weeklong eating binge for the Eid’l Fitr holiday, doctors were braced for an annual spike in complaints of rapid weight gain.

Millions in the world’s most populous Muslim nation typically mark the end of the Ramadan fasting month visiting families and relatives, in reunions where traditional foods rich in sugars and fats take center stage.

While there is no conclusive study linking festive binging with weight gain, doctors say many more patients knock on their doors after nonstop gorging on delicacies, such as beef rendang (spicy stew) and chicken opor (coconut curry).

“People tend to eat with a vengeance during Eid,” said nutritionist Martalena Purba, head of the Indonesia Dietetic Association.

“After a month depriving themselves of food, they consume all fatty dishes in unusually huge portions to the point that their blood sugar levels go haywire, their cholesterol level rises and they put on weight,” she told Agence France-Presse.

Indonesia is Southeast Asia’s largest economy, with a population of 240 million.

In India, shoppers flocked to markets while in Pakistan, women painted their feet and hands with henna tattoos.

The feast of Eid’l Fitr was also to start on Sunday in Saudi Arabia, the home of Islam’s holiest sites, the kingdom’s religious authorities said. Qatar, Yemen and Libya also announced a Sunday start to the Eid.

“As we join the Muslim ummah (community) in celebration of today’s Eid’l Fitr, we pray for peace to reign all over Mindanao and upon each one of us … Let us not give up hope for peace and reconciliation even among our leaders overtaken by some political rift,” Hataman said in a statement.

“We offer solidarity prayers for the calamity-stricken residents of the north, and for those displaced by recent skirmishes in some parts of Muslim Mindanao.”

In Manila, Vice President Jejomar Binay called on Filipinos, whether Muslims or not, to thank God “by spreading love, compassion and charity to those in need.”

Binay said the holiday “reminds our Muslim brethren to give thanks for the Almighty’s blessings by spreading love, compassion and charity to those in need. But these are potent reminders for all Filipinos, regardless of faith.”

President Aquino declared Monday a holiday “to bring the religious and cultural significance of Eid’l Fitr to the fore of national consciousness.”

His peace adviser, Teresita Deles, said: “Eid’l Fitr is a time of rejoicing in the fulfillment of one’s spirit. It is also a time to nurture peace as one becomes stronger and wiser at the heart of struggles, and gentler and more forgiving in the midst of conflict.” With reports from Jerome Aning and Michael Lim Ubac in Manila, and AP and AFP