US missile destroyer to dock in Manila Aug. 18 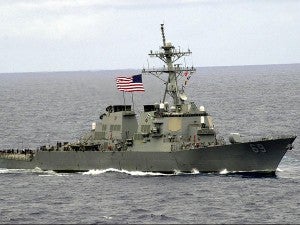 MANILA, Philippines—The USS Milius, a guided missile destroyer, will arrive at the Manila South Harbor on August 18 for a routine call and four-day goodwill visit, the US Embassy in Manila said Friday.

“The ship’s visit highlights the strong historic, community and military connections between the United States and the Republic of the Philippines,” the statement from the Embassy said.

Based on information posted on a Facebook account created for the US ship (http://www.facebook.com/USSMILIUS/app_174927749225665), USS Milius is described as capable of providing multi-mission offensive and defensive capabilities in support of the United States’ maritime security strategy.

It says the ship is named after Navy Pilot Captain Paul L. Milius, who was killed while conducting an armed reconnaissance mission over Laos on an OP-2E observation aircraft.

Milius’ aircraft was hit by anti-aircraft artillery fire but he chose to remain at the controls of the aircraft while ordering his seven crew members to bail out, according to the information. All seven were rescued.

It says Milius, though believed to have bailed out before the plane crashed, was never found. He was declared “presumed killed in action” and was posthumously awarded by the Navy Cross.