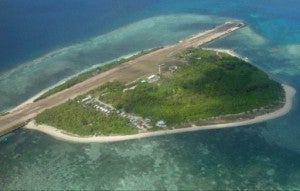 MANILA, Philippines — Former Philippine Permanent Representative to the United Nations Lauro Baja Jr. on Wednesday called for the need for countries involved in the West Philippine Sea (South China Sea) dispute to develop “personal rapport,” saying that countries’ positions on the issues have hardened over the years.

“Now the issues have proliferated, the positions have been hardened and the approach needs to be an informal low-key meeting in the background. The pronouncements are too open and the steps being taken are too publicized,” Baja said in an interview with reporters.

Asked about the comparison between the handling of the Scarborough shoal disputes then and now, Baja, also former Undersecretary for Policy, said that Association of South East Asian Nations Senior Officials Meeting (Asean-Som) leaders then were more in contact with each other and developed a “very informal network.”

“Even outside Asean meetings we phone each other, we call each other, especially when we were working the Declaration of Code of Conduct (Doc),” he said.

He said that he did not know if it still happened at the present but that China was kept informed of the developments while the Asean-Som were working with the Doc.

Focus on diplomacy, need to react

Baja said that the country needed to focus more on diplomacy because it did not have the means to resolve the issue through military action.

When pressed by reporters that the country also pursued diplomatic means for its claims over the Mischief Reef but it has since then been occupied by China, Baja said:

“They occupied the Mischief Reef because we were remiss in our surveillance and monitoring.”

He said the same mistake should not be repeated in the handling of the Scarborough Shoal dispute, saying that the country must always react through political and diplomatic means.

“It will be another Mischief Reef if we do not do anything. There are reports that they (China) have roped it off. I don’t know what kind of rope that is but we must we must react. I don’t know how, certainly not through military means, but political and diplomatic means,” Baja said.

Baja added that he had always advocated for international, multilateral, even regional approach to the disputes but that “Panatag is more or less bilateral between the Philippines and China.”

“Why not engage in bilateral talks. Anyway, I was glad that the Secretary of Foreign Affairs has stated that bilateral, regional, multilateral approaches are not mutually exclusive of each other. That has been my position since the very beginning,” Baja said.

When asked about the effect of the failure of the Asean nations to come up with a joint statement over West Philippine Dispute Sea disputes as causing a divide among the Asean nations, he said the set back was “divisive but not incurable.”

“That lack of communiqué is a hiccup but no matter how you paper it with some positive spin it’s a setback for Asean, for those advocating for their positions to be included in the communiqué,” Baja said.

But he said that the Indonesian foreign minister’s move to rally Asean countries for a consensus on the issue was a “good” damage control.

He said that Asean’s attitude towards Scarborough Shoal was “more or less understandable,” saying that other Asean countries “have no dog in the fight between the Philippines and China.”

“Secondly, there is Asean solidarity but this is always tramped up by the bilateral relations between China and the individual Asean members,” Baja said.

Baja also attributed China’s more aggressive and more hardened stance on the issues to the country being a major power and having a “special position in foreign affairs.”

“China then is not China now with all the trappings of a major power. So when you’re pronouncing a position of strength and when you know that you are acting as not only as an economic power but as political and diplomatic power then you tend to swagger your dealings with other countries,” he said.

He said that other claimant countries, including the Philippines, have also improved in terms of diplomatic gains but that these “pale in comparison with China’s rise.”

Asked about the United States’ involvement in the territorial disputes, he said that the country’s so-called new policy of pivot in the Asia Pacific was interplay between China and the US in so far as the security architecture in Asia is concerned.

“All the relations between China and its neighbors will always have that US equation,” he said.