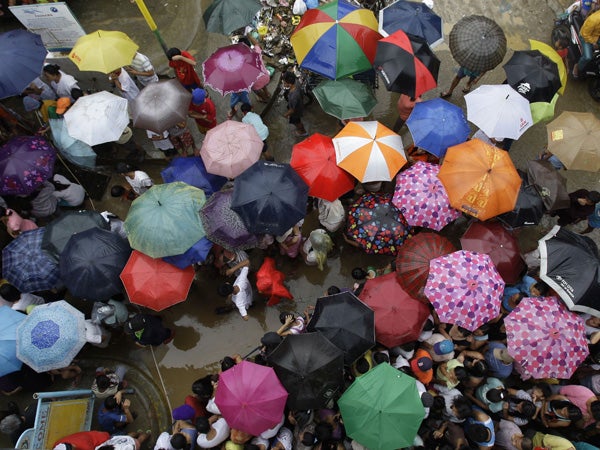 Flood affected residents gather under the rain as they queue for relief goods in suburban Marikina, east of Manila, Philippines on Tuesday, Aug. 14, 2012. Tropical Storm Kai-Tak will continue to move northwestward on Wednesday toward southeastern China and is expected to dump more rain in the flood-battered northern Philippines a week after half of the sprawling capital city got submerged. AP/Aaron Favila

MANILA, Philippines— A second tropical storm in as many weeks battered the northern Philippines after making landfall Wednesday, killing at least two people, as forecasters warned that the still-reeling capital could see more flooding.

Meanwhile, President Benigno Aquino III scrambled to avert another crisis when hundreds of state weather agency employees protested over their pay and warned that forecasting services could deteriorate.

Tropical Storm Kai-Tak slammed ashore in northeastern Isabela province with maximum winds of 100 kilometers (60 miles) per hour and higher gusts. It is expected to traverse northern farming provinces and exit along Luzon Island’s western seaboard possibly as a powerful typhoon heading toward southern China in the direction of Hong Kong.

The head of the disaster-relief agency, Benito Ramos, reported two deaths, including a man who drowned while swimming in Ilocos Norte province. He said some roads were flooded knee-deep, and government forecasters warned of intense rains that may drench the sprawling capital, Manila, which is still reeling from last week’s monsoon deluge.

On Tuesday, an alarmed Aquino rushed to assure the protesting weather agency employees that steps were being taken to resume payment of the cash benefits that had been suspended in March.

“I just reminded that since the weather is bad and we have a weather disturbance, we should not add to the worries of those who were hit by the floods,” Aquino told reporters after a hasty meeting with the restive employees.

Forecasters and other employees of the Philippine Atmospheric Geophysical and Astronomical Services Administration wore black arm bands and hoisted streamers urging the government to resume hazard pay and other allowances.

While the workers did not plan any work stoppage, protest leader Ramon Agustin said some hard-up employees had failed to report for work due to lack of money.

“The only reason why we remain strong in performing our tasks is our pure love for the country, but this will eventually weaken,” Agustin said in a news conference at the weather agency, which buzzed with activity as forecasters tracked the second storm.

The archipelago located in the tropical far western Pacific serves like a welcome mat for about 20 tropical storms and typhoons that develop in the open ocean and blow toward Asia every year. Heavy rain from those storms and the annual monsoon often cause flooding and landslides and leave a trail of death and destruction.

Budget Secretary Florencio Abad said payment of the hazard pay and other cash benefits had been suspended to correct past irregularities, but added the workers would get back the benefits soon.

Agustin said the employees have lost an average of 10,000 pesos ($238) monthly since the benefits were suspended by officials in March.