On being a barbarian and the hazing death of Andrei Marcos 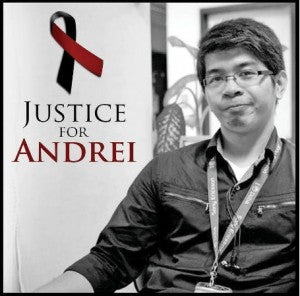 SAN FRANCISCO—I was a barbarian in college.

That’s how students who were not members of a fraternity were referred to at UP Diliman.

It’s an odd label, one that suggests that those of us who opted against joining a frat were ‘uncivilized.’

For, of course, the death of San Beda law student Marc Andrei Marcos shows that there’s nothing civilized about some of the ways of fraternities.

I have many friends who are frat members. I know fraternities do good and important work.

In fact, one well-known fraternity, Sigma Rho, will be holding a major summit in San Francisco next month. It’s expected to be an important gathering geared to addressing serious issues in the Philippines and beyond.
My friend, Sigma Rhoan Rick Rocamora is excited about the event. One of the important guests, he told me, is Angelo Valencia, a corporate lawyer who finds time to build schools throughout the Philippines, from Tawi-Tawi to Luzon.

Other members expected to attend are also doing impressive work, and they will no doubt talk about ways to help our country. In fact, as I said, many fraternities make significant contributions to society.

But the murder of Andrei Marcos is a reminder of a serious flaw in the world of fraternities. For this is not about one specific school or one specific frat. The tragedy on the whole underscores the need for fraternities to begin acting more decisively on a longtime problem: the use of physical pain and humiliation to welcome recruits, a tradition based on a culture of violence and cruelty.

I understand why young people are drawn to frats. To be honest, I was also tempted to join one myself — to be part of a brotherhood, to be a member of a group in which members look out for one another. I’m not even totally against some form of initiation ritual, a process by which members are put to a test and offered a chance to pay their dues to join a group.

But the use of cruelty, violence and humiliation has always baffled me. It was the main reason I decided to become a barbarian. For I can almost imagine asking a recruiter, a would-be brod: ‘So let me get this straight: you want me to let you beat me up so I can call you my brother?’

Lawyer Ted Te expressed his outrage over the hazing death of Andrei Marcos in a Facebok post, saying “anger and rage simply do not cut it when it comes to the utter stupidity of such traditions.”

Once in a while, that culture of cruelty gets a much-needed jolt.  Andrei Marcos’s brutal murder was certainly one.

So did an incident many years ago involving another U.P. friend.

He asked me to refer to him simply as Fratboy Alumnus. He’s now a well-regarded expert in his field.

During our college days, he granted his family’s request to join a known fraternity in which they had strong ties. He endured the initiation and became a member. But he was so disgusted with the process, Fratboy Alumnus eventually left.

“It was very un-Christian, Boying,” I remember him telling me then.

Recently, in the wake of what happened to Andrei Ramos, he elaborated on his ordeal.

Hitting a neophyte in the back is known as standard practice in frat initiations. But the group Fratboy Alumnus joined also played it smart: they found ways to inflict pain without getting into trouble. The frat realized that it was a bad idea to use baseball bats or iron pipes because “that risked breaking the neophyte’s legs,” Fratboy Alumnus said.

Instead, they used paddles, he added.
“The master swings the paddle with the full force of swinging a baseball bat,” he continued. “The resulting cracking sound is distinct, and frat men would recognize it anywhere. The neophyte winces, but the swings are repeated, sometimes to spell out the full frat name. …The result is an ass and hips that are literally as purple as eggplant.”

Now, this fraternity has members who are prominent politicians and professionals. Apparently, the doctors from their ranks play an important role in the initiation process.

“We dreaded the doctor brods because they knew how to inflict on us the depths of pain without going over our limits,” Fratboy Alumnus recalled.

“What happens after weeks of hazing?” he said. “Upon becoming a brod, the fear takes the form of total obedience. Frat heads hold absolute power, they cannot be disobeyed. Dare to defy the grand head, and he can give the word to have you beaten up. I suspect that military hazing takes place also to instill such total obedience.”

Then there’s the “code of silence,” which Fratboy Alumnus summarized this way: “Evil done by the frat or its members must remain secret – or else. Put it together: the threat of torture makes you obey a dictator and cover up the group’s felonies.”

Again, I stress here that I know many fraternities do great work. My friend Rick Rocamora, a respected documentary photographer, is proud of his Sigma Rho ties. He is working on a book on the organization.

“The truth is nobody would like to talk about initiations because we believed we should not be defined by that but instead [be defined by] who we represent in government, judiciary, business and many other fields and a common goal of paglingkuran ang bayan [serve the nation],” he tells me.

And I have no doubt that many fraternity leaders and members also see themselves playing meaningful and important roles in Philippine society.

Still, there’s that stigma, that culture of cruelty and violence.

That won’t change overnight. But maybe Andrei Marcos’s death can be a powerful reminder that it has to eventually.

So here’s a suggestion for the Sigma Rhoans having this grand reunion in San Francisco. I mention them because they’ll be in town. This certainly applies to other frats.

Why not use the gathering not only to denounce Andrei Marcos’s death, but also to kick off a new movement in the Philippine frat world – one that completely rejects the use of violence and cruelty in recruiting new members.

One that puts recruits to a test in a way that that does not put their lives at risk – or even humiliates them.

One that rejects completely the ways of barbarians.

Read Next
US slams China over new garrison
EDITORS' PICK
Is it safe to talk politics again at family gatherings? ‘The Reconciliation Dinner’ shows us what that’s like
vivo’s coming to town to grant wishes with more holiday promos
The Best Tech Gifts For The 2022 Holidays
House energy committee chair Arroyo bats for cheap electricity
EDITORIAL: To a bike-friendly future
Pagasa: Warm, sunny Sunday in most parts of PH
MOST READ
LOOK: Vhong Navarro transferred to BJMP detention facility in Taguig
The Elephant Man in the Senate
Posh village as ‘shabu’ haven
LOOK: Zanjoe Marudo bonds with Ria Atayde, her family
Don't miss out on the latest news and information.