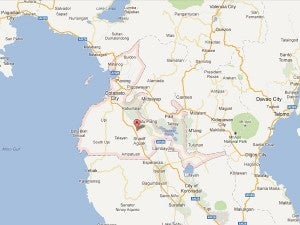 The vessels were on their way from Miri in Sarawak, Malaysia, to pick up cargo in Davao City.

“They are being documented in Datu Blah Sinsuat before they will be turned over to concerned government agencies,” Adecer said.

Colonel Alex Balutan, commander of the 1st Marine Brigade, said the seamen told them they were attacked by pirates on July 24 while sailing to Davao City.

“They were on board the two vessels named Woodman 38 and Woodman 39 and were traveling in convoy when they were attacked by pirates,” Balutan said.

“They claimed that their vessels were taken by the pirates and they were forced to jump overboard,” Balutan said.

“When their captors learned that Malaysian authorities were looking for them, they were ordered to jump off the boats,” Asto said.

Balutan said that before the pirates sailed away, they threw two inflatable rafts into the sea, which the sailors paddled toward Maguindanao.

He said that on Tuesday, Datu Blah Sinsuat fishermen saw the two life rafts around 2 p.m. and towed them, using motorized bancas, to shore in Barangay (village) Pura.

Village officials then notified the Marines and Army soldiers stationed in the town.