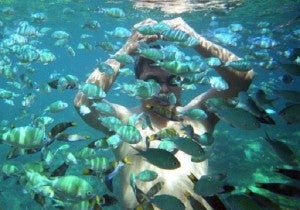 A diver hand-feeds fish in the crystal-clear waters off Boracay in this 2005 file photo. AFP

YEOSU, South Korea—For its powdery sand beaches, crystal clear waters and extensive marine biodiversity, the Philippines is not only attracting potential tourists here but also great allies in the protection and preservation of its abundant coastal and marine resources.

Joining more than 100 countries in showcasing their marine resources at the 2012 Yeosu
Expo, the Philippines has set up a pavilion in this South Korean coastal province that takes thousands of visitors daily to a virtual scuba-diving expedition of its inherent shoreline and underwater opulence.

Lee Joon-hee, commissioner general of the international exposition being held in Yeosu, 455 kilometers south of Seoul, said the Philippines, being one of the 17 mega-diverse countries in the world with an abundant marine life, deserve the best care and attention the world could offer.

“Located at the center of the Coral Triangle, the Philippines’ more than 7,000 islands have a unique and diverse marine life with vast coral reefs and sea grass beds,” Lee said at the celebration of Philippine National Day at the expo on July 22.

“It goes without saying that the Philippines has a rich marine diversity and it deserves the best care and attention we can offer,” the Korean official stressed.

Lee also cited the Philippines for its interest in environmental preservation and active role in the international movement to protect marine resources.

Almost a million Koreans visit the Philippines yearly for its blue waters and white-sand beaches, he said.

Lee added that the Philippines’ world-class diving opportunities attracted not only Koreans but also many other tourists from across the world.

Each participating country has a day for promotion at the expo, which has the theme “The Living Ocean and Coast.”

During its turn on July 22, the Philippines wowed the hundreds of thousands of visitors-mostly South Koreans-with a vivid cultural program showcasing the country’s arts and culture.

The cultural show, revolving around the theme “Islands of Diversity, Seas of Connectivity,” featured the Ballet Philippines, University of Cebu Dance Company, singers Kyla and Gian Magdangal and Down to Mars.

The Department of Tourism’s catchy “It’s More Fun in the Philippines” ad frequently flashed on a 218-meter-long, 30-meter-wide LED screen mounted on the ceiling of the central corridor.

Tourism Secretary Ramon Jimenez Jr. said the expo was very “useful and relevant” to the Philippines, whose bountiful marine resources are vulnerable to abuse and pollution.

“It is all about the ocean and the common interest in the preservation of natural resources and its sustainability,” Jimenez said in an interview after the opening ceremony of the Philippine National Day.

“The Philippines, both a touristic destination and an economic power, draws a lot from the oceans,” Jimenez said. “This is very important for us. This is not something we can stay away from.”

In his speech, Jimenez said the Philippines’ rich marine and coastal resources provided tourism opportunities, as well as livelihood and income, for many communities.

Its seas connect the Philippines to the world, he said, “[f]or oceans do not separate but connect people, as the seas surrounding us demonstrate today.”

Its facade is a three-dimensional interpretation of coral—the foundation of marine life—and it emits a purplish glow.

From a distance, visitors can see the pavilion’s exterior glowing like the skin of the “butanding,” or whale shark, under the sea.

To give visitors a feel of the Philippines’ popular sandy beaches, the place showcases four types of sand gathered from the famous beaches of the country: pink sand from Santa Cruz Island in Zamboanga City; white sand from the world-famous Boracay Island in Aklan; black sand from Santo Domingo, Albay, and brown sand from San Lorenzo, Guimaras.

Since the expo opening on May 12, more than 372,000 visitors have called at the Philippine pavilion—the targeted 10 percent of the more than 3 million guests expected to go there.

On peak days, the pavilion gets 13,000 visitors a day and an average of 4,000 on slow days, according to Jeannie Sudario, planning officer of the Tourism Promotions Board.

“The Philippines’ participation in this international exposition is highly appreciated by the Korean government,” Lee said.

“I am confident that the Philippines and South Korea will continue to nurture the strong [ties] our nations enjoy. Now, it’s time to turn over a new leaf in order to protect our oceans from further deterioration.”