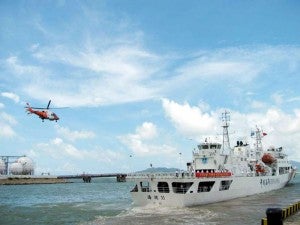 BEIJING—China said Tuesday its territorial claims in the West Philippine Sea (South China Sea) did not interfere with other countries’ right to travel in the disputed waters and pledged to resolve the latest spat peacefully.

Tensions between China and other rival claimants to the strategically vital waters—home to two potentially oil-rich archipelagos, the Paracels and Spratlys—have escalated in recent weeks.

The Philippines and Vietnam in particular have expressed alarm at what they say are increasingly aggressive actions by China in the disputed waters, but Beijing reiterated its commitment to resolve the issue peacefully.

“There has never been a problem with freedom of navigation in the South China Sea.”

China was a “constructive force in the maintenance of peace and stability in the South China Sea,” he added.

Hong’s comments came after Singapore on Monday urged China to be more open about the extent of its territorial claims, saying Beijing’s ambiguity was causing international concern.

Singapore’s foreign ministry said that while the city-state had no claims of its own, it was a major trading nation whose interests could be affected by issues relating to freedom of navigation in the area.

US Senator John McCain meanwhile called for Washington to expand military and political support to Southeast Asian nations to stand up to China in the increasingly volatile waters.

McCain said Monday he welcomed the Obama administration’s defense of freedom of navigation in the West Philippine Sea but said it should go further.

He said it should let “other countries know, where possible, which claims the United States accepts, which ones we do not, and what actions we are prepared to support,” especially in defense of the Philippines, a treaty ally.