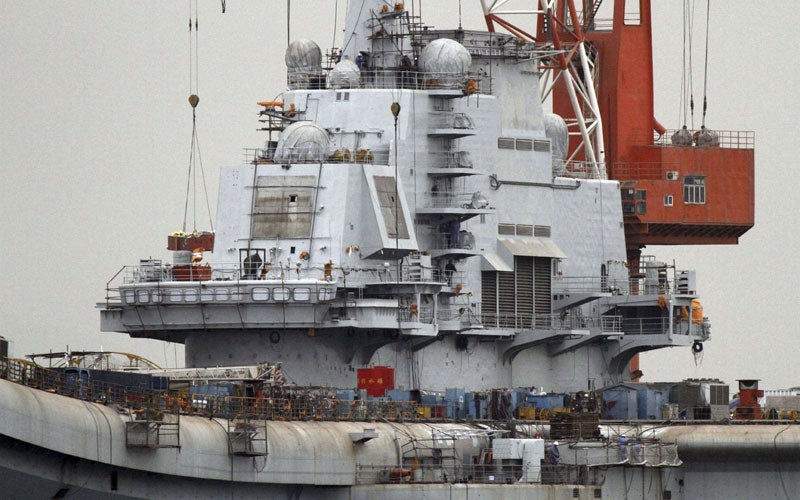 China's first aircraft carrier is under restoration in a shipyard in Dalian in northeastern China's Liaoning province. AP File Photo

On Tuesday, the Hong Kong Commercial Daily, which broke the story of the vessel’s confirmation, quoted unnamed military sources saying the carrier will go on sea trials on July 1 but will not be officially launched until October.

The sources said the test has been expedited in view of rising tensions in the South China Sea—home to two potentially oil-rich archipelagos, the Paracels and Spratlys—in recent weeks.

China’s military “hopes it will show the strength of the Chinese maritime forces to deter other nations which are eyeing the South China Sea in order to calm tensions,” the sources said.

They added that the sea trial date was also picked to mark the 90th anniversary of the Chinese Communist Party, but noted that factors such as weather could affect the planned test run.

China’s military did not immediately respond to an Agence France-Presse request for comment.

Tensions between Beijing and other rival claimants to the strategically vital West Philippine Sea have heightened recently.

The Philippines and Vietnam in particular have expressed alarm at what they say are increasingly aggressive actions by China in the disputed waters, but Beijing has insisted it is committed to resolving the issue peacefully.

Chinese officials have previously said its first aircraft carrier would not pose a threat to other nations, in accordance with Beijing’s defensive military strategy.

The Chinese aircraft carrier plan was confirmed when the chief of the General Staff of the People’s Liberation Army, Chen Bingde confirmed the ship’s existence in an interview with the Hong Kong paper.

He said the 300 meter (990-foot) former Soviet carrier, originally called the Varyag, was being overhauled. The ship is currently based in the northeast port of Dalian.

An expert on China’s military has reportedly said the carrier would be used for training and as a model for a future indigenously-built ship.

The Varyag was originally built for the Soviet navy but construction was interrupted by the collapse of the Soviet Union in 1991.

The PLA—the largest army in the world—is hugely secretive about its defense programs, which benefit from a large military budget boosted by the nation’s runaway economic growth.