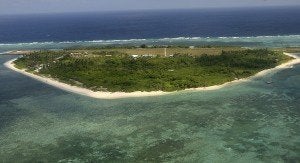 MANILA, Philippines—Employees of the municipal government on Pag-asa reported on Friday that Chinese fishermen continued collecting corals from the edge of islands on the fringe of reefs 3 kilometers from Pag-asa.

“We counted at least five large fishing boats from the eastern side of the island,” said Ronnie Cojambo, a municipal employee, told the Inquirer by text message. “At least two were new and just arrived.”

Kalayaan Mayor Eugenio Bito-onon said the municipal staff on the island had wanted to go out to stop the Chinese but he had prevailed on them not do anything, as the matter was for the DFA to deal with.

Bito-onon said he also ordered the Kalayaan sea patrol to refrain from accosting to the Chinese fishermen.

“We will just let the DFA handle this matter,” he said.

A marine conservation expert said on Friday the coral mining by the Chinese off Pag-asa would have a serious impact on important marine ecosystems around the Coral Triangle.

Romeo Trono, former head of Conservation International Philippines and the turtle conservation program of the government, urged countries bound by the international agreements to protect the Coral Triangle to help ask China to stop its fishermen from mining corals in the West Philippine Sea.

Rex Robles, a retired Navy officer, said the government should ask the United Nations not for a peacekeeping force but for a maritime patrol to protect the Philippine environment from Chinese destruction.

“The corals have been there for years, and now they’re destroying them in an hour or two,” Robles said.

“There should be patrols in the whole area there, which should be declared a sanctuary and supervised accordingly,” he said. TJ Burgonio in Manila and Redempto Anda, Inquirer Southern Luzon