“We’re still studying the tack that we will be pursuing legally. We expect to have the recommendations from our advisers by the end of this month so we are taking a good look at it. But the legal approach is one that we would like to pursue,” Del Rosario said. 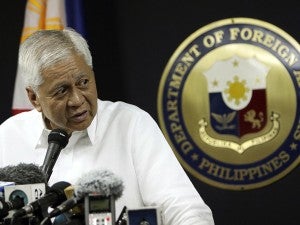 Del Rosario spoke to reporters at a lunch hosted by the Department of Foreign Affairs in celebration of its 114th anniversary.

President Benigno Aquino III, in his State of the Nation Address (SONA) on Monday, said that the country was consulting experts in dealing with the dispute.

Manila had been pushing for the maritime dispute to be brought to the International Tribunal on the Law of the Sea (ITLOS), stressing the need for international mediation to resolve China and the Philippines’ respective claims over a rock formation in the West Philippine Sea. China, however, has rejected the proposal.

When asked about the Chinese moves to deploy fishing vessels around Pag-asa Island, Aquino told reporters:

“I don’t need to comment on the actions of another nation because, perhaps, the whole world could testify to what is happening in Panatag Shoal (and) Bajo de Masinloc.”

Aquino spoke at an interview with reporters after he served as a keynote speaker at the 114th anniversary of the Department of Foreign Affairs in Pasay City.

Repeating what he had said in his State of the Nation Address, Aquino said: “We need to keep calm, we need a thorough study, so that we could resolve this and really protect the interest of the country.”

Del Rosario also echoed the president, saying the country remained firm in its position to seek a peaceful resolve to the dispute.

“The president answered that question earlier. He said that the world is watching and we are also monitoring the developments there but our position is firm. We continue to seek a peaceful resolution to the issue. So we’ll see what happens,” Del Rosario said, when asked about his reactions to the recent Chinese moves.

Military sources have reported that a fleet of 20 fishing vessels, believed to be escorted by at least two naval frigates of the People’s Liberation Army, were deployed around Pagasa Island, the largest of five islands and islets in the Spratlys being claimed by the Philippines.

When asked about his reactions to a warning by an international group that tensions over claims to the Spratly Islands could escalate into conflict, Aquino said that the country’s main interest was a peaceful resolution to the conflict.

“We are always ready, based on our own limitations,” Aquino said. He added that comments about armed conflict only “enhance the prospects of having an armed conflict.”

“And let us reiterate, our interest is a peaceful resolution of this conflict,” Aquino added.

Del Rosario added that he was looking forward to meeting the Association of South East Asian Nation’s (ASEAN) foreign ministers at the sidelines of the United Nations (UN) General Assembly in September and that he would “probably” have bilateral meetings with them.

When asked if the dispute would be tackled in the assembly, Del Rosario said that he was not aware of the topics they would be taking up at the UN.

ASEAN came under scrutiny after they were not able to come up with a joint communique for the first time because of disagreements on the West Philippine Sea dispute.

When asked about the said debacle, Del Rosario said that “as far as I’m concerned that’s behind us.” He added that he was not giving up on ASEAN.

Meanwhile, Aquino, in his keynote speech, also lauded the DFA for its efforts to push for a code of conduct to “safeguard our rights in the West Philippine Sea.”

“Our position is very clear: There are territories that should be taken up for discussions in order to determine the ownership and there are areas that shouldn’t be contested because those are ours. We are always open for a peaceful solution of this issue in accordance with the law and treaties signed by countries in the region,” Aquino said.