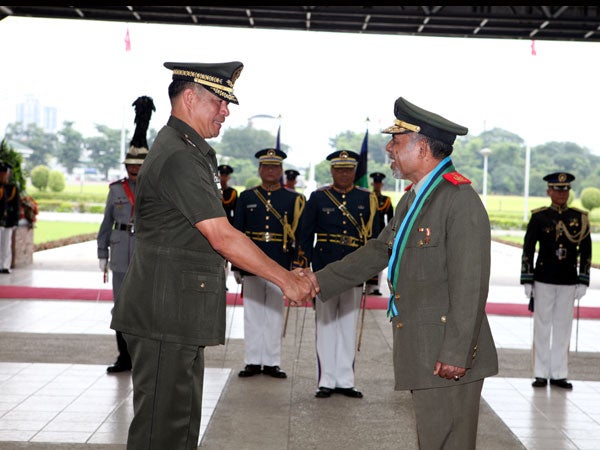 The Armed Forces of the Philippines’ Chief of Staff General Jessie D Dellosa welcomes East Timor’s Chief of Defense Force MGen Lere Anan Timur today, July 25 in the Arrival Honors at the Canopy Area of the General Headquarters. MGen Timur will be in the country until July 28 for meetings with various AFP commanders and tours of different military facilities.

MANILA, Philippines – The military chief of East Timor is on a five-day visit in the Philippines “to enhance bilateral military cooperation” between the two countries.

“Since East Timor is a very young nation with a newly-organized defense force, the Armed Forces of the Philippines offered its assistance in building their military capability,” military spokesman Colonel Arnulfo Marcelo Burgos Jr. said. 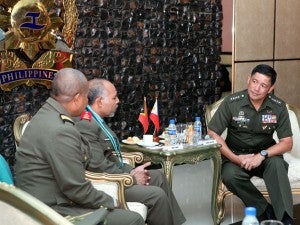 Timur will also meet with Colonel Abraham Claro Cases, Commander of the AFP Peacekeeping Operations Center. The military had been sending peace observers as part of the United Nations Integrated Mission in Timor Leste to support the government in promoting peace and stability, Burgos said.

The AFP also contributed troops and military hardware to the International Force in East Timor, a military mission aimed at restoring peace and order in East Timor prior its independence.

“The AFP has been all-out in advocating peace and security not only in our country but also to the rest of the world. Our partnership with foreign security and defense institutions manifests our belief in teamwork as the way forward towards just and lasting peace,” Dellosa said in a statement.