Bad weather in HK cancels some flights to, from Manila 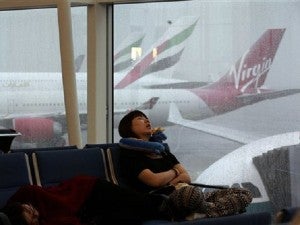 Passengers sleep near planes as heavy rain falls on the airport in Hong Kong on Tuesday morning, July 24, 2012. Some flights between Manila and Hong Kong were canceled early Tuesday due to bad weather in China’s special administrative region. AP/NG HAN GUAN

According to the Manila International Airport Authority, the early morning flight service of both Cathay Pacific and Cebu Pacific had to be canceled as airline companies cited extremely bad weather in Hong Kong wrought by Typhoon Vicente.

Cathay Pacific flight CX904, which was scheduled to depart from Manila at 6:20 a.m., was canceled. All the affected passengers were checked in at a nearby hotel while waiting for the weather in Hong Kong to improve and the flight to resume.

Cebu Pacific also canceled its early morning flight, 5J108, which was scheduled to depart at 5:40 a.m. for Hong Kong. Cebu Pacific said all affected passengers were to be accommodated in the next available flights.

Meanwhile, two Hong Kong-bound flights from Canada and Amsterdam had to be diverted to Manila early Tuesday morning, also due to the bad weather at the Hong Kong International Airport (HKIA).

Cathay Pacific flight CX829 from Toronto landed at the Ninoy Aquino International Airport at 6:52 a.m. due to the strong winds at the HKIA.

With the weather conditions at HKIA improving later in the morning, the two diverted flights were able to leave Manila by noon.