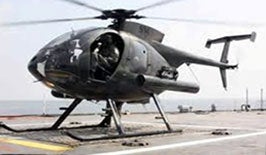 MANILA, Philippines—The Philippines will acquire 10 attack helicopters starting next year in a bid to boost the capabilities of the poorly equipped military, an air force spokesman said Wednesday.

Italy, Britain, France, Russia and South Africa are all being eyed to supply the helicopters, Lieutenant Colonel Miguel Okol said, although he declined to specify which models were being considered.

The brand-new machines will upgrade the fleet of US-made MG-520 light attack helicopters that the air force has been using since the 1990s.

“What we are going to get are armed attack helicopters… that can carry more payload than the MG-520,” Okol told AFP.

He declined to specify the cost of the acquisition but said the government had already allocated the required funds.

The new aircraft will be used for “internal security operations, border security and support operations,” he said.

The Philippines is battling communist insurgents in rural areas throughout the archipelago, as well as Muslim extremists in the troubled southern regions.

In recent months tensions have also risen with China over conflicting territorial claims in the South China Sea, but Okol said the acquisition of the attack helicopters was unrelated.

The tensions with China have highlighted the weakness of the Philippine military, which is one of the most poorly quipped in the region, relying largely on surplus US equipment.

The Philippines has been refurbishing its ageing MG-520 helicopters, other military sources said.

The country has recently been stepping up its modernization efforts and plans to acquire new fighter-trainer jets and attack and transport planes by 2014, the defense secretary said earlier.