Amid tension, Aquino thanks China for Angat Dam project 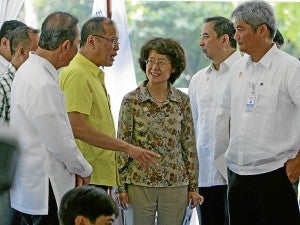 President Benigno Aquino on Monday thanked China for funding a P5.3-billion water improvement project in Angat Dam and underscored the importance of cooperation and respect among neighboring nations.

Mr. Aquino’s statement came even as Malacañang stressed that the Philippines would not stand down and withdraw from disputed areas in the West Philippine Sea (South China Sea).

“If you mean stand down our statements, I think we will maintain our sovereign rights over our Exclusive Economic Zone,” presidential spokesperson Edwin Lacierda said in response to China’s statement that Manila should withdraw from disputed areas because  it had no military might to defend them. “That is something we will not give up.”

Lacierda also said the country had not used its military force and had always pursued a peaceful solution to its dispute with China.

The President said the inauguration of the second phase of the Angat water utilization and aqueduct improvement project at La Mesa Portal in Quezon City would ensure the safety and integrity of the delivery of water from Angat Dam to water treatment plants in La Mesa and Balara, both in Quezon City.

China’s Export-Import Bank provided the funding through a preferential buyer loan agreement signed during the  administration of then President Gloria Macapagal-Arroyo. The contractor was China International Water and Electric Co.

“We thank China for the funds it provided so that this important project can be implemented,” Mr. Aquino said in his speech.

He said “strong relationships with neighboring countries” would help the government respond to problems and needs of the Filipinos.

“We are one in the world in our advocacy: A world where each individual, each community and each country is being respected and recognized for its innate dignity,” Mr. Aquino said, apparently referring to the territorial dispute between Manila and Beijing.

Chinese Ambassador Ma Keqing sat a few meters away as the President spoke. Reporters tried to interview the ambassador but she declined comment on Mr. Aquino’s speech and the grounding of the Chinese Navy warship in Philippine territory last week.

Lacierda reiterated the government’s desire for a peaceful resolution of its conflict with China. But he also made it clear that Panatag Shoal (Scarborough Shoal) was not a disputed territory because it is within the country’s Exclusive Economic Zone.

He said that the government was still studying on whether to redeploy Philippine vessels to Panatag Shoal.

Chinese fishing vessels remained in the shoal. The Philippines pulled out its two ships in the area due to a typhoon  a month ago.