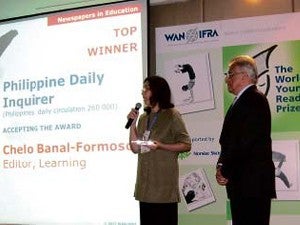 MANILA, Philippines—The Series “Money Matters for Teens: You Can Bank on It” of the Inquirer’s Learning Section received the top prize in the Newspapers in Education (NIE) category from the World Association of Newspapers and News Publishers (WAN-Ifra) at the annual Young Reader Prize competition.

At the recent awarding ceremonies in Bangkok, Thailand, during the Asia-Pacific Young Reader Summit 2012, Jacob Mathew, president of WAN-Ifra, said the annual competition honored “excellence in efforts to engage the youth.” It was also “a showcase of exceptional work [being done] to engage young readers.”

The Inquirer’s six-week “Money Matters for Teens: You Can Bank on It” series, which was supported by Citibank Philippines and the Bangko Sentral ng Pilipinas (BSP), was designed to teach high school students the basics of financial literacy.

Aralynn McMane, executive director of WAN-Ifra young readership development, told the Inquirer that the jury found the series “a very effective project in a country taking full advantage of a smart sponsorship strategy to do solid NIE and provide valuable lessons about money.”

A total of 20 schools, 16 of them public institutions, participated in the campaign, which was part of the Learning section’s “Inquirer in Education” initiative. Teachers who took part in the program used each article in the series to teach their economics and mathematics classes the rudiments of good fiscal management.

As outlined by WAN-Ifra, the Inquirer campaign addressed the challenge of how to help teenagers use the paper to do better in managing money. With the assistance of Citibank and the BSP, some 27,000 extra copies of the Inquirer were distributed and about 5,000 students were reached.

Chelo Banal-Formoso, Learning section editor, pointed out in her brief acceptance speech the significance of the initiative to Filipino young readers. She said many young people in the Philippines often sought employment before or immediately after graduating from high school but often did not have the knowledge and the skills to manage their finances.

Youth present in all pages

During the award ceremonies, McMane said the winners were “leaders in causes that matter” and they tend to be around for important causes like environment, politics and others. “They treat young people as normal human beings. They quote young people as real people in their normal stories and they are present in all pages, not just the youth section,” she said.

McMane said the newspaper was “the one trusted commercial product that can be in schools with no problem.”

McMane said NIE “is the core strategy for us. If you don’t do that (focus on education), you’re not going to be able to get much else done.”

Mathew called the winners “examples worth emulating, full of ideas that we can take home.” He said the outstanding projects shared a few common features like making excellent use of all platforms, excellent use of resources while making money, too, sometimes.

“All these newspapers take young readers seriously as key to the future,” he noted.

She added, “This year’s winners offer a fantastic set of examples for how to capture and captivate this audience (the youth) at that key point in their lives when they will or will not become interested for life in a multiplatform relationship with their newspaper.”

Saying it made “sense that new focus is on young reader development,” Mathew stressed that “the [newspaper] industry cannot underestimate the importance of young people” and that there was a need to connect with them. He told his audience of editors, publishers and other high-ranking newspaper executives, “[We] must not forget to make meaningful connections with them (the youth) regardless of the economic situation.”

“As you know, young people matter more than ever today. … They [are not just] future readers but they are spearheading change in all facets of life,” he said.

He urged the newspaper industry people to start their efforts early to engage a new generation of readers and teach the young about the role of newspapers in a democratic society.

“It is important that we make sure that the youth in this region learn about all this through our papers,” he stressed.

WAN-Ifra awards annually the World Young Reader prizes to newspapers that have devised the best project or activity to attract young readers. Support for this year’s prizes came from Norske Skog, the Norway-based global paper producer.

This year, WAN-Ifra presented 21 prizes to newspapers and a printing plant that found innovative ways to attract young people to the news.

I-Next of India won the World Young Reader Newspaper of the Year award.  It also topped the public service category for a project that encouraged 18- to 25-year-olds to vote.

WAN-Ifra, based in Paris, France, and Darmstadt, Germany, with subsidiaries in Singapore, India, Spain, France and Sweden, is the global organization of the world’s newspapers and news publishers. It represents more than 18,000 publications, 15,000 online sites and over 3,000 companies in more than 120 countries.

Its core mission is to defend and promote press freedom, quality journalism and editorial integrity and the development of prosperous businesses as well as help assure a civic-minded, literate new generation of readers.