Lean Alejandro in his 50s and the season of painful anniversaries 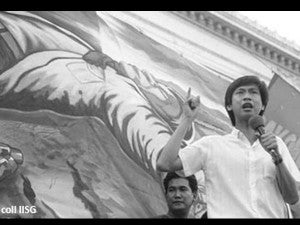 SAN FRANCISCO – Lean Alejandro would have turned 52 this week. He was 27 when he died in September 1987.

I was going to wait a couple more months before writing this, in time for the 25th anniversary of his assassination.

People on Facebook, including many of my friends, aren’t waiting either. They’ve been posting recollections about Lean, about the most important leader of the martial law generation.

Besides, we are entering a season of painful anniversaries, of unpleasant, but important remembrances.

Three anniversaries, in fact, on three consecutive days in September.

If Lean is the powerful symbol of my generation, the martial law babies, Edjop, as Jopson was known, was the symbol of an earlier generation, they who lived through the youth upheaval in the late 1960s and early 1970s, the First Quarter Storm.

I wrote about Edjop earlier this year at the height of the impeachment trial of ex-Chief Justice Renato Corona. (You can read that column here.)

The fact that many people reacted with passionate admiration for him and his life of courage, especially in the context of a contemporary political battle involving a public official accused of abusing his power, underscores the continuing importance of Edjop’s story.

I guess that’s because we are naturally drawn to stories of people who were willing to give up their comfortable lives, their careers, even their lives — especially, when these heroes made these sacrifice to confront tyranny.

Which brings us to the third upcoming anniversary.

September 21 marks the 40th anniversary of the imposition of martial law which gave rise to the most corrupt and brutal regime in Philippine history.

Ferdinand Marcos remains an influential figure in Philippine society. His allies have been trying to clean up his image, to conceal or distort the most despicable chapters of his regime.

Sadly, they’ve succeeded to some extent.

It’s mainly because memories fade and people forget about the looting, the killing, the bullying—about the reasons why young Filipinos like Lean and Edjop turned their backs on what certainly would have been more comfortable paths to fight dictatorship.

The good news is memories don’t totally fade. And there are many Filipinos who simply won’t let them fade.

There are many who won’t let the dictator’s image be sanitized and glorified. And there are just as many who certainly won’t let the martyrs be ignored and forgotten.

This week, I realized that that’s certainly true of Lean Alejandro.

His photos have been showing up on Facebook walls. Like many of us, he would have been in his 50s today. But there’s Lean in the pictures, a young man in his 20s, so committed to ridding the nation of a tyrant, to the fight for justice.

A previously unpublished picture by Luis Liwanag shows Lean with wife Liddy Nacpil at a Cordillera Day celebration in 1985. Lean is in his familiar photographer’s vest, wearing rubber slippers.

Some photos are familiar. There’s one of Lean on the cover of Mr. & Ms. Magazine in 1984. He was then chairman of the UP Student Council, and had been leading a series of marches on Malacañang.

And we actually did.

That’s probably one of the high points of my UP Diliman years – even though that was also the summer many of us found out what it was like to be tear-gassed.

But there were many of us then, and together we felt strong. Teargas forced us to retreat, but then we came back.

And in front of us, leading us forward was Lean Alejandro.