Aquino: We won’t be bullied by China 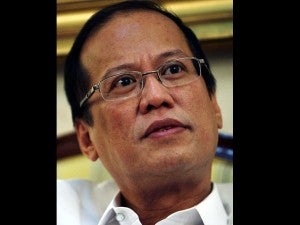 President Benigno Aquino listens to a question during an interview with The Associated Press at Malacañang Palace Friday. Aquino insisted that the Philippines won't be bullied by China in a territorial spat over the Spratly Islands. AP

MANILA, Philippines—President Benigno Aquino III insisted Friday that the Philippines won’t be bullied by China in a territorial spat over the Spratly Islands and that Beijing should stop intruding into waters claimed by Manila.

Aquino also said in an interview with The Associated Press that a government-backed mission to scout Philippine-claimed waters for oil and gas had turned up “very good” prospects, though he declined to elaborate. He said the Philippines reserved the right to explore its waters despite China’s rival claims.

China, which claims the Spratlys and all other waters in the West Philippine Sea (South China Sea), last week demanded that its southern neighbors halt any oil exploration there without Beijing’s permission. The Chinese ambassador in Manila said, however, that China was open to joint exploration with other countries.

“We will not be pushed around because we are a tiny state compared with theirs,” Aquino said.

“We think we have very solid grounds to say ‘do not intrude into our territory’ and that is not a source of dispute or should not be a source of dispute,” the President said. “We will continue with dialogues, but I think, for our internal affairs, we don’t have to ask anybody else’s permission.”

The vast West Philippine Sea and its island groups form one of Asia’s most politically sensitive regions, with China, Vietnam and the Philippines trading diplomatic barbs recently over overlapping territorial claims. Vietnam’s navy conducted live-firing exercises Monday after accusing Chinese boats of disrupting oil and gas exploration in its waters.

The Philippines already has protested over six or seven incidents involving alleged Chinese intrusion into waters that Manila says belongs to it because they lie within its 200-mile (320-kilometer) exclusive economic zone that is covered by the UN Convention on the Law of the Sea.

Chinese Ambassador Liu Jianchao said last week that China was exercising its sovereign rights over all of the West Philippine Sea.

“The overall strategy, we’re not going to engage in an arms race with them. We are not going to escalate the tensions there but we do have to protect our rights,” Aquino said.

The battle for ownership of the potentially oil-rich Spratly Islands has settled into an uneasy stand-off since the last fighting, involving China and Vietnam, that killed more than 70 Vietnamese sailors in 1988.

In 2002, 10-member Association of Southeast Asian Nations and China signed a nonbinding accord that calls for maintaining the status quo. China wants to engage claimants individually—against the wishes of countries like the Philippines that want to negotiate as a bloc.

Complicating the issue is the role the United States wants to play in resolving the dispute. It is a key Philippine defense treaty partner, which means that in case of Chinese attack it is obligated to come to Manila’s aid.

US Ambassador Harry Thomas said last week that Washington would stand by the Philippines.

The UK-based Forum Energy PLC, which has a contract with the government to explore the Reed Bank, has announced that it has completed seismic tests in the area and will process the data to identify the best location for drilling appraisal wells.

Forum Energy Robin Nicholson said in a statement in March that his company is looking forward “to making further investments into the project.”

The company said that in 2006, a seismic survey in an area in the Reed Bank indicated it contained 3.4 trillion cubic feet of gas.