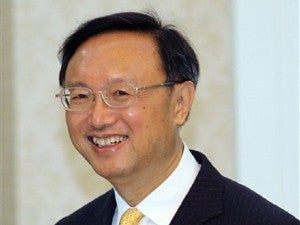 Chinese Foreign Minister Yang Liechi arrives for talks with his North Korean counterpart Pak Ui Chun at their bilateral meeting on the sidelines of Asean meeting in Phnom Penh, Cambodia Wednesday, July 11, 2012. Liechi also met with his Japanese counterpart Koichiro Gemba in Phnom Penh where he "reaffirmed China's principled position" on the islands known as Senkaku in Japanese and Diaoyu in Chinese. AP/Sakchai Lalit

PHNOM PENH—China told Japan on Wednesday it should respect Beijing’s “indisputable sovereignty” over islands claimed by both countries in the East China Sea, which are again the cause of fresh tension.

Chinese Foreign Minister Yang Liechi met with Japanese counterpart Koichiro Gemba in Phnom Penh where he “reaffirmed China’s principled position” on the islands known as Senkaku in Japanese and Diaoyu in Chinese.

“He stressed that Diaoyu Islands and their affiliated islets have always been China’s territory since ancient times, over which China has indisputable sovereignty,” said a statement from the Chinese delegation.

Yang “urged Japan to adhere to relevant agreements and understanding between the two sides in good faith, return to the right path of managing differences through dialogue and consultation with the Chinese side and take concrete actions to uphold the overall interests of the bilateral ties.”

Japan summoned the Chinese ambassador in Tokyo on Wednesday as three Chinese patrol boats approached the chain of islands.

The crew of the vessels, which have since left the islands’ immediate vicinity, initially rebuffed Japanese orders to leave, Japanese officials said.