Philippine Air Force to get new warplanes by 2014 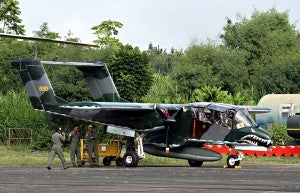 MANILA, Philippines—The Philippines, which is now embroiled in a territorial dispute with China, is set to acquire new warplanes in two years to upgrade its poorly-equipped air force, the defense minister said Friday.

Speaking at the 65th anniversary of the Philippine Air Force, Gazmin said “these aircraft shall once and for all, erase the ironic and naughty commentary that our present airforce is all air, devoid of force.”

The defense department also plans to sign contracts by July 31 to implement 138 military modernization projects over the next five years, he added, without saying how much the contracts would cost or who would supply such equipment.

The Philippines has one of the most poorly-equipped militaries in the region, having retired the last of its fighter jets in 2005.

The weakness of the military was highlighted when the Philippines got into a standoff with China in April over the Scarborough Shoal, an outcropping of rocks in the West Philippine Sea (South China Sea) that both countries claim as their territory.

China claims nearly all of the West Philippine Sea, even waters close to the coasts of neighboring countries. The Philippines says the shoal is well within its 200-nautical-mile exclusive economic zone.

The two countries also have wider territorial disputes over parts of the Spratly islands in the West Philippine Sea .

Gazmin did not mention the territorial dispute but stressed that air force personnel were all over the archipelago, including the West Philippine Sea.

The Philippines has looked to its main defense ally, the United States, to help it upgrade its armed forces but President Benigno Aquino said in an interview in May, that it was looking for aircraft from outside the US as well.