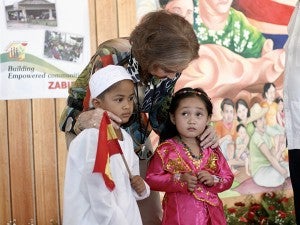 WHERE’S HER CROWN? A little girl asks as Queen Sofia puts her arms around two children during her visit to Zamboanga City. JULIE S. ALIPALA/INQUIRER MINDANAO

Queen Sofia of Spain, who wraps up Friday her five-day visit, may have inadvertently glossed over the role of the Siege of Baler in the restoration of bilateral relations between Manila and Madrid.

Unbeknownst to the queen, the warm and enthusiastic welcome accorded to her by the country since her arrival on Monday stemmed from a singular act passed by Congress in 2003—the Filipino-Spanish Friendship Act authored by Senator Edgardo J. Angara.

Neither her speech at Tuesday’s state dinner nor her itinerary paid homage to the singular event that is officially celebrated in Spain for exemplifying the universal traits of valor, magnanimity and dignity even during war times between Spanish and Filipino troops called “Katipuneros.”

“In her speech, she did not mention Baler’s contributions to the return of normal relations between Spain and the Philippines, which was practically zero but is now growing,” said Angara, who attended the state banquet held at the Rizal Ballroom in Malacañang.

Republic Act No. 9187 recognizes June 30 of every year as the Philippine-Spanish Friendship Day “to mark the act of benevolence in 1899 when President Emilio Aguinaldo issued a decree stating that Spanish soldiers who survived the Siege of Baler be treated not as prisoners, but as amigos,” said Angara.

“It showed the generosity of Filipinos in victory, and on the part of the Spaniards, the valor and loyalty to their flag and king,” Angara said. “It was the singular act that changed the near-zero relations between Manila and Madrid … from bad to good.”

At the close of the Philippine revolutionary war against Spain in 1898, 54 Spaniards—49 soldiers, three officers, one medical officer and a parish priest—barricaded themselves inside the Church of San Luis de Tolosa in Baler, Aurora.

During the yearlong siege, Filipino troops allowed carabaos (water buffalos) to stray into the church grounds, providing food for the famished Spanish soldiers.

When the dust settled, 35 managed to survive, including the six who deserted. Five died from gunshot wounds, while 14 died from beriberi and dysentery.

When the surviving Spaniards emerged from the church, they received cheers of “Amigos, amigos!” from the Katipuneros and natives of Baler.

President Aguinaldo’s declaration on June 30, 1899, stating that the survivors of the Siege of Baler shall be treated as friends, not as prisoners, guaranteed their safe travel back home.

“The siege embodies courage, honor, compassion and charity, the same spirit that fuels the Philippine-Spanish Friendship Day,” Angara said, recalling that the Spanish movie “Los Ultimos de Filipinas” was based on the siege.

The movie raised the morale of the Spanish people during the time of dictator Francisco Franco, when war-torn Spain became impoverished in the aftermath of World War II.

The movie also popularized the classic song “Yo te dire,” comparable to “Dahil sa Iyo (Because of You).”

For the latest visit of Queen Sofia—her fifth trip to the Philippines since 1995—she toured Manila, Albay province and Zamboanga City, where she inspected schools, hospitals and museums that have received funding from Spain.

In Zamboanga City Thursday, the queen visited the Kalinaw Urban Poor Community in Sinunuc village. Wearing a printed blouse and light brown slacks, she casually walked to the multipurpose hall where she was met by two toddlers who offered her a bouquet of flowers.

“Is that the queen?” Jenny Azurin, 8, asked her mother, Geraldine, 39, who nodded. “Where’s her crown? Why isn’t she wearing a gown?” the child asked after the queen smiled at her and briefly touched her face.

“She likes to see where the money went and was spent and she is very committed to development projects,” Pardo told the Inquirer.

“Queen Sofia also wants to meet and interact with children and women because she is always very worried about the situation of the children in the world,” she said.

Fr. Angel Calvo, a Claretian missionary who heads Zamboanga-Basilan Integrated Development Alliance Inc., said Spain had been helping Zabida for 13 years now and had so far poured in about 5 million euros to the group’s education, livelihood and shelter projects.