Del Rosario to take up Spratly row with Hillary Clinton—diplomat 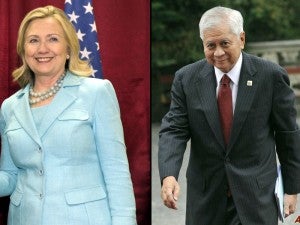 MANILA, Philippines – The Philippines’ “rules-based approach” to settling the Spratlys dispute and China’s use of its growing economic and military power to assert its claims will most likely be the main talking points during next week’s meeting in Washington between Foreign Secretary Albert del Rosario and US Secretary of State Hillary Clinton, a senior Philippine diplomat disclosed Thursday.

The unidentified source noted that Clinton extended an invitation for Del Rosario to visit Washington last month when tensions between Manila and Beijing over the Spratlys flared up.

Foreign Assistant Secretary J. Eduardo Malaya, who is also the department’s spokesman, confirmed that Del Rosario was making an “official trip to the US upon the invitation of Clinton” but did not provide details about the topics for dicussion.

Del Rosario said last week that “a rules-based approach provides the key to securing the country’s claims to the Spratly Islands and advancing the peaceful settlement of disputes in the South China Sea.”

“Where there are disputes, rules provide an effective tool for peaceful and fair resolution,” he said, adding that the Philippine policy on the South China Sea was “grounded on an unwavering adherence to international law.”

“We expect nothing less from our international partners,” Del Rosario added, referring to the other Spratly claimants: China, Vietnam, Taiwan, Malaysia, and Brunei.

Philippine Ambassador to the US Jose Cuisia said that when Clinton called Del Rosario sometime in March to congratulate him on his appointment as foreign secretary, they agreed to meet.

“Clinton followed that up with the invitation,” Cuisia said, adding the DFA boss would be in Washington from June 20 to 24.

Last weekend, the US Embassy in Manila released Clinton’s message to the Philippines on its Independence Day in which she said both countries were “long-standing friends and partners.”

“We stood together during World War II to defend liberal democratic values. Today, we are working together on many new fronts. Whether we are working to find ways to catalyze economic growth, helping victims of natural disasters, combating extremism, or calling for greater protection of human rights, our two countries share a vision of a better world,” said Clinton.

Last October, Clinton told leaders of the Association of Southeast Asian Nations during the Asean summit in Hanoi that the US had a key stake in increasingly tense territorial disputes between China and its neighbors.

“The US has a national interest in the freedom of navigation and unimpeded lawful commerce. And when disputes arise over maritime territory, we are committed to resolving them peacefully based on customary international law,” she said.

Clinton said Washington had no intention of relinquishing its role as a dominant power in the region, stressing, “We will continue to leverage the strength of our bilateral relationships and continue expanding our emerging partnerships with a wide range of countries.”

“Her comments were couched in diplomatic niceties, but the message was clear: China must not use its growing economic and military strength to bully its neighbors. Previous similar remarks from Clinton and other US officials have drawn harsh criticism from the Chinese, who claim sovereignty over vast swaths of territory in the East and South China seas,” said an Associated Press report.