Palace: Too early to push for Spratlys joint exploration 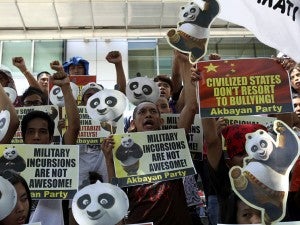 Protesters shout slogans during a rally outside the Chinese Consulate in Makati City Thursday to protest alleged military incursions of China into the disputed Spratly group of islands. AP

MANILA, Philippines—Malacañang said on Thursday it would be premature to push for an agreement for joint exploration and use among claimant countries in the disputed areas of the West Philippine Sea (South China Sea).

“I think it’s premature to talk about that right now. We’re still not clear what our territory is and what are considered disputed. We still have a lot of things to settle,” said Secretary Ramon Carandang, head of the Presidential Communications Development and Strategic Planning Office, in reaction to former speaker Jose de Venecia Jr.’s proposal.

“Ultimately, what we do want to see is a way that the resources in the disputed areas can be jointly explored and jointly exploited by the different claimants. But it’s far ahead into the future,” he added.

The Spratlys are being claimed in whole or in parts by the Philippines, China, Brunei, Malaysia, Vietnam and other Southeast Asian countries.