After 271 surgeries in Samar, Mercy rests 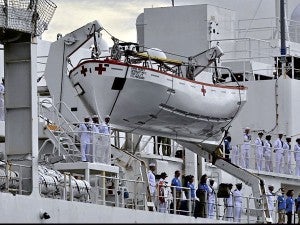 SUBIC BAY FREEPORT, Philippines—Docking here is a much deserved break for crew members of the American hospital ship USNS Mercy, whose last stop was Samar where its crew conducted 271 surgeries and treated at least 16,000 patients.

“The ship is designed to be a hospital ship, ready to respond to any contingency when needed in conflict. We’ve also participated at one time in the Gulf War,” said the ship’s senior medical officer, Captain Tim Hinman.

“This is quite a story. We evaluated 603 patients, and we completed 271 surgeries on board, which is a very large number in such a short time. Many of those were general surgeries. Most involved cataract and hernia operations and fracture repairs,” she said.

She said the crew also conducted animal vaccinations, built four classrooms and renovated a playground and a clinic in Samar.

The ship’s Filipino-American crew members said they used their five-day “liberty” to reunite with Filipino relatives and see the country.

The USNS Mercy, which is engaged in humanitarian and disaster response missions in the Pacific, has at least 200 Filipino-Americans on board. It is in Subic to restock, resupply and to give its crew rest and recreation time after a two-week humanitarian and medical mission in Calbayog.

Roman Ram Biares, 28, a technician in the ship’s pharmacy, said his relatives from Bicol waited for him at Subic Bay.

Biares, who grew up in Bicol, said that in his excitement to be in the country, he tried to see the outline of the region on the night the ship was passing through the waters of southern Luzon on the way to Subic Bay.

Ronald Burias, 31, who is now five years in the service and a first-time crew member of USNS Mercy, said he would go to Lipa City in Batangas to see his grandmother, nieces and nephews.

He said the more than 1,000 personnel of the USNS Mercy worked hard during their medical mission in Calbayog. “The people who [our doctors] operated on were already pre-screened. We also have nongovernment organizations working with us,” he said.