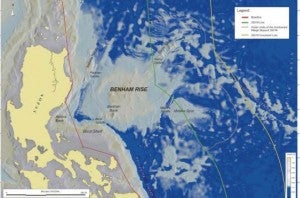 After getting the nod of the United Nations on its claim to Benham Rise, the Philippines has moved in on the submerged landmass believed to be rich in natural gas and minerals off eastern Luzon.

Benham Rise is found in one of the country’s “unexploited” fishing grounds, according to Assistant Director Gil Adora of the Bureau of Fisheries and Aquatic Resources (BFAR). His agency is currently assessing the area’s marine resources.

Adora said commercial fishermen from China and Taiwan had been entering the eastern seaboard of Luzon over the past years. Their ships are more advanced and well-equipped to handle the strong waves there, he said.

“Taiwan is exploiting it right now,” he added.

In April, the agency implementing the UN Convention on the Law of the Sea (Unclos) informed the Department of Environment and Natural Resources (DENR) that Benham Rise is part of the Philippines’ continental shelf and territory.

The Unclos, concluded in 1982, defines the rights and responsibilities of nations in their use of the world’s oceans.

Also known as Benham Plateau, the massive formation of basalt, a common volcanic rock, has been described in studies as a thickened portion of the Philippine sea plate’s oceanic crust.

According to the DENR, the plateau is rich in natural gas and manganese nodules. The waters of the 13-million-hectare continental shelf off the coast of Aurora province is rich in blue fin tuna, Adora said.

The BFAR official explained that the Pacific blue fin usually found in the colder waters of the northern Pacific has thrived in the seas east of Luzon, which are colder than the other tuna fishing grounds of Filipino fishermen.

Access to the rich fishing ground will be an advantage to the Aquino administration.

Tuna is one of the Philippines’ top fisheries exports, but the volume declined recently after conservation measures were imposed in the Pacific high seas.

BFAR Director Asis Perez said the reopening of the Pacific high seas would mean an additional 150,000 MT of tuna catch for the Philippines. A limited number of Filipino commercial fishers will be allowed entry there, starting September, he said.

Adora said the BFAR, an attached agency of the Department of Agriculture, was studying Benham Rise to determine the fish species there and the best time to venture out to sea.

A research vessel sent by the agency will provide scientific information to Philippine commercial fishers so they can retrofit their ships for fishing in the eastern seaboard.

According to BFAR officials, the currents are unlike other fishing grounds in the Western Pacific high seas and the West Philippine Sea because the area is on the path of typhoons.

The BFAR study is expected to be finished by yearend.