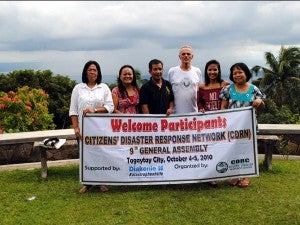 Wilhelm Geertman (3rd from left), a Dutch NGO worker, killed in his office in Angeles, Pampanga, Tuesday by a lone gunman. Activist group Bayan has condemned the killing and calls for swift justice. Photo courtesy of Bayan

MANILA, Philippines – An activist group condemned the killing of a Dutch Non-Government Organization (NGO) worker in Pampanga Tuesday and launched its own investigation to determine the circumstances surrounding the incident.

Geertman was shot by a lone gunman in his office in Angeles City, Pampanga, just past noon Tuesday.

He died around 1:20 p.m. at the emergency room of the Sacred Heart Medical Center.

Bayan said that they are conducting an independent investigation to determine the circumstances of Geertman’s death.

Geertman, executive director of disaster relief NGO Alay Bayan Inc, has resided in the Philippines for the past 46 years. He spoke fluent Filipino and has worked among farmers in rural communities, Bayan said.

“We have worked with Wilhelm on relief missions, particularly last year in Nueva Ecija and Aurora in the aftermath of typhoon Pedring,” Bayan said.

“Geertman is the second European NGO-Community worker killed under the Aquino [administration], after the death of Fr. Pops Tentorio in Mindanao,” Bayan added.

“We call for a swift investigation and justice for the killing of Wilhelm Geertman,” it said.