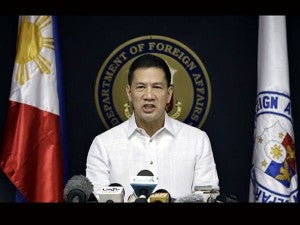 MANILA, Philippines – The government’s plan to request the United States  to deploy spy planes over the West Philippine Sea should not be seen as a move that will escalate tensions with China but as part of “our sovereign prerogative to monitor our areas,” the Department of Foreign Affairs said Tuesday.

“Our treaty ally has been assisting us in developing a minimum credible defense posture and that includes the maritime domain awareness and surveillance reconnaissance as well as intelligence gathering,” said DFA spokesman Raul Hernandez.

But Hernandez said that he had no information yet on whether there were final plans to make the request “but if a request is made then this will be to monitor that part of our area.”

“It’s part of our sovereign prerogative and what we are doing is we are monitoring what’s happening in the area and as I said our treaty ally has been assisting us in our objective to develop maritime domain awareness,” Hernandez said.

On Monday, President Benigno Aquino III said that he may ask the US to deploy spy planes over the West Philippine Sea to help monitor the disputed waters.

In a text message to Inquirer.net, Zhang Hua, spokesperson of the Chinese embassy in Manila, said that in Chinese Foreign Ministry Spokesperson Liu Weimin’s remarks on July 3, China took notice of the reports of the Philippine plans and that it hoped that parties concerned in the Asia Pacific Region would “do things conducive to regional peace and stability.”

“We have noticed the reports. I’d like to reiterate it is the hope of the Chinese side that peace and stability can be maintained in Asia Pacific region, and parties concerned to things conducive to regional peace and stability,” Zhang quoted Liu Weimin in his text message to INQUIRER.net