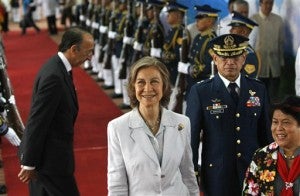 MANILA, Philippines—Spain’s Queen Sofia arrived in the Philippines Monday for a five-day visit to review development projects funded by the Spanish government.

The queen was greeted at Manila airport by top Philippine dignitaries, before she left for a private gathering at the Spanish ambassador’s residence, an official said.

The queen’s visit to the former Spanish colony is “a reaffirmation of Spain’s commitment towards addressing the myriad developments and challenges the Philippines and the rest of the world are facing today.” the foreign department said.

This marks the queen’s fifth trip to the Philippines since 1995, when she accompanied her husband King Juan Carlos I on an official visit.

The highlight of her trip includes a meeting with President Aquino on Tuesday and a tour of various schools and hospitals that have received funding from Spain, the presidential palace said.

She was also expected to visit the province of Albay and Zamboanga, a former Spanish port city in the southern Philippines.

Spain ranks as the Philippines’ 28th largest trading partner with total bilateral trade amounting to $329.6 million in 2011, according to official statistics.

Spain offered the Philippines development assistance worth 28.9 million euros ($36.58 million) in grants and loans in the same year.

Up to 60,000 Filipinos live and work in Spain, and many back home trace their roots to Spanish immigrants who joined the first colonies in the Philippines.

Spain colonized the Philippines for more than 300 years from 1521, bringing the Catholic religion across the islands.

It ceded the Philippines to the United States at the end of the Spanish-American war in 1898.