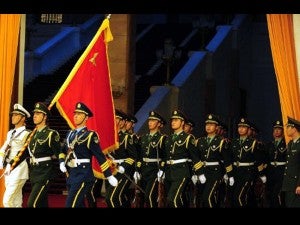 MANILA, Philippines —Finding itself in a territorial dispute with powerful China without one warship to call its own, the Philippine government heaved a sigh of relief, on Wednesday, after China declared it would not use force to settle the controversy in the West Philippine Sea (South China Sea).

“The statement from the Chinese foreign ministry is very optimistic. It’s good that we heard (the foreign ministry spokesperson Hong Lei) say that they are not going to resort to the use of force,” Presidential Spokesperson Edwin Lacierda said in Wednesday’s news briefing in Malacañang.

“It is something that we will certainly welcome so at least we have in the region an assurance that no use of force will be necessary to resolve the situation here. So we have emphasized both on the part of China and the Philippines the need for diplomacy and a peaceful solution,” he added.

Lacierda’s remarks came a day after Hong said that China would not resort to the use of force or the threat of force in pursuing a resolution to the dispute over territories in the West Philippine Sea.

China, however, chided US Senator Jim Webb after he called for a tougher US stance in the dispute and a multilateral solution to the controversy. Through Hong, it said only countries with claims to the disputed territories should be involved in the discussions.

China’s remarks on the US having to keep off the West Philippine Sea issue also came just as US ambassador Harry Thomas assured President Benigno Aquino of US’s support for the Philippines, in all matters, including those in connection with the South China Sea and the disputed Spratly Islands.

“The Philippines and the United States are strategic treaty allies. We will continue to consult and work with each other on issues including the South China Sea and the Spratly Islands,” Thomas said in a speech before an audience that included President Aquino.

In a news conference on Tuesday afternoon, Aquino said the Philippines would not want to be involved in any hostility with China. He, however, added that having the presence of the US in the region would ensure freedom of navigation in the area and would ensure that all parties adhere to international law.

Citing the United Nations Convention on the Laws of the Sea, Aquino has insisted that the Philippines has undisputed rights over the Recto Bank or Reed Bank as it is well within the country’s exclusive economic zone.

He said the bank was way beyond China’s exclusive economic zone.

Lacierda said Malacañang would welcome Webb’s statement if its objective was to have a peaceful resolution to the ongoing dispute.

“Anything that will downplay any inflammatory statement is certainly welcome for us,” Lacierda said.

“If the purpose of the resolution of Senator Jim Webb… is to have a peaceful resolution on the matter and then certainly we welcome it,” he added.